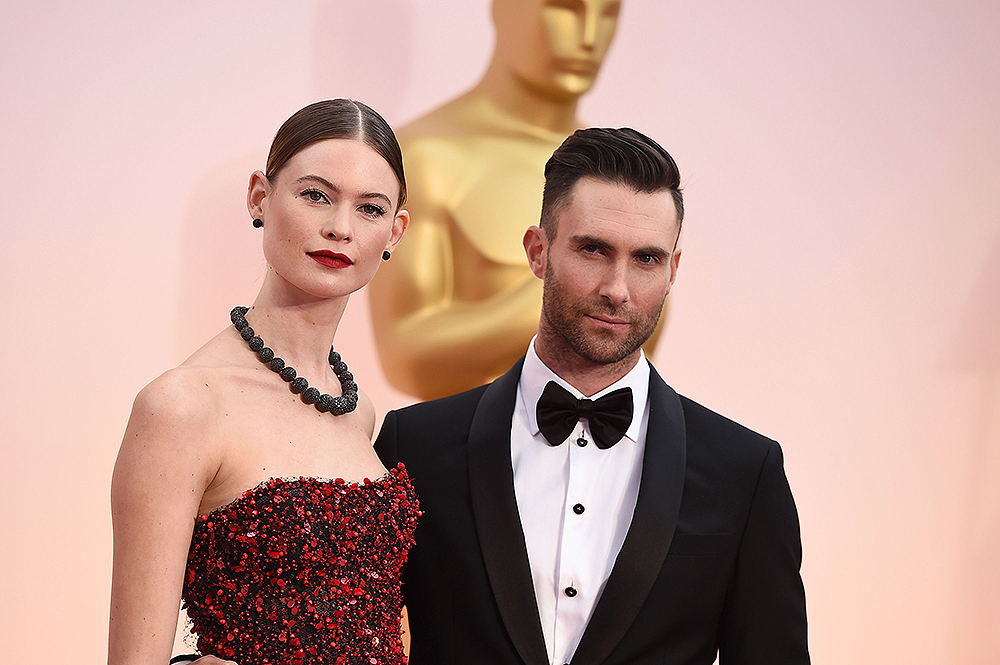 Adam Levine, 43, is at the center of an alleged cheating scandal involving Instagram and OnlyFans model Sumner Stroh. The Maroon 5 frontman was accused of being unfaithful to his wife Behati Prinsloo, 34, who is currently pregnant with their third child. Adam denied having an affair, though the singer did admit to acting “inappropriate” and using “poor judgement.”

Adam has been married to Behati since 2014 and they have two children together, with another on the way. The Namibian model has yet to speak out about her husband’s alleged affair. HollywoodLife has rounded up everything you need to know about Behati, the alleged scandal, and Adam’s dating history, below.

Behati Prinsloo is former Victoria’s Secret Angel model who was born in South Africa. She began her modeling career when she was discovered on vacation in Cape Town. Behati started walking in fashion shows around the world and was featured on the cover of international magazines. She’s also been involved in ad campaigns for companies like H&M, Gap, Marc by Marc Jacobs, and more. Behati walked in nine Victoria’s Secret Fashion Shows between 2007 and 2015, before returning to to the runway one more time for the 2018 show. Behati was also featured in Rihanna‘s 2021 Savage x Fenty Vol. 3 fashion show.

Behati and Adam met through a mutual friend via email in 2012. “Adam was looking for a girl for a music video that could do some action stuff, and our friend was like, ‘You should meet Behati because she’s a total tomboy and down for anything,’ ” Behati recalled of meeting her future husband, in a 2019 interview with Net-a-Porter. Behati explained that she didn’t take the job, but she kept in touch with Adam and they “fell in love over email.” When reflecting on their first date, Behati said, “He took me for dinner and we talked for hours and had the best time. It was love at first sight, it was crazy. We broke up for two months, realized that it was the worst decision, then got back together.”

Adam and Behati made their first public appearance together at the 2012 GQ Gentleman’s Ball. After their brief two-month break up, Adam and Behati got engaged in July 2013. “It was a one-knee thing!” Behati told ET Canada about the musician’s proposal, which involved a 1930s engagement ring. “It was serious, it was very old school,” she added.

The couple’s wedding took place in Los Cabos, Mexico on July 19, 2014. Jonah Hill officiated the ceremony with 275 guests and Adam performed with his Maroon 5 bandmates at the reception. Behati wore a gorgeous cut-out gown designed by Alexander Wang on her wedding day. The couple welcomed their first child, daughter Dusty Rose, 5, on September 21, 2016. Their second daughter Gio Grace, 4, was born on February 15, 2018.

Sumner Stroh: 5 Things To Know About Model At Center Of Rumored Affair With Adam Levine

Adam and Behati confirmed they were expecting their third child together on September 15, just days before the bombshell alleged cheating scandal made headlines. Behati shared a photo of her growing baby bump to Instagram. One day earlier, a source told HollywoodLife that the couple “couldn’t be happier” that their family is growing again. “Behati has always known she’s wanted several children because she wants to give her kids the siblings she never had. And Adam comes from a big family so it’s really all he’s ever known,” the source EXCLUSIVELY shared. Behati and Adam have not revealed the sex of their third child.

On Sept. 19, Instagram and OnlyFans model Sumner Stroh claimed that she had a physical affair with Adam. Sumner alleged in a TikTok video (which can be seen below) that she was being blackmailed with racy photos by people she thought she could trust, giving her no other option than to explain what allegedly went down between her and the “Animals” singer.

embarrassed I was involved w a man with this utter lack of remorse and respect. #greenscreen

“Essentially, I was having an affair with a man who was married to a Victoria’s Secret model. At the time, you know, I was young, I was naive and I mean quite frankly, I feel exploited,” she said in the video. Sumner showed alleged messages between herself and Adam, in which he allegedly said that it was “unreal how f—king hot” she is. Sumner claimed that she and Adam were “seeing each other for about a year” before ending their alleged affair. Her video also included alleged messages from Adam on June 1, where he asked her if she would mind if he named his unborn child Sumner.

Adam denied having a physical affair with Sumner, though he did admit to some wrongdoings. “I used poor judgment in speaking with anyone other than my wife in ANY kind of flirtatious manner,” Adam told TMZ. “I did not have an affair, nevertheless, I crossed the line during a regrettable period of my life. In certain instances it became inappropriate. I have addressed that and taken proactive steps to remedy this with my family. My wife and family is all I care about in this world. To be this naive and stupid enough to risk the only thing that truly matters to me was the greatest mistake I could ever make. I will never make it again. I take full responsibility. We will get through it and we will get through it together.”

Adam Levine dated several women before his romance with Behati. His earliest known girlfriend is his high school sweetheart Jane Herman, who used to be the editor of Vogue. The Maroon 5 album Songs About Jane was inspired by that relationship.

In 2006, Adam was briefly romantically linked to Jessica Simpson. Three years later, Adam was rumored to be dating model Angela Bellotte. They were seen on a plane together heading to New York City, where they were later photographed holding hands. Adam and Angela reportedly broke up after less than a year.

From 2010 to 2012, Adam dated Victoria’s Secret model Anne Vyalitsyna, 36. The “Stereo Hearts” hitmaker reportedly met Anne at the Sport’s Illustrated Swimsuit Issue release party in Las Vegas. There apparently was no bad blood between Adam and Anne when they broke up. In fact, Anne had nothing but kind words to say about the former The Voice judge after he got engaged to Behati in 2013.

“I’m such a believer in love. I will love him forever. He is such a wonderful guy. But we didn’t work out,” she said on E!’s Fashion Police. Anne went on to date MLB star Matt Harvey, followed by former Yahoo! executive Adam Cahan. With Adam, Anne welcomed a daughter named Alaska in June 2015. The couple broke up in 2018 after getting engaged.