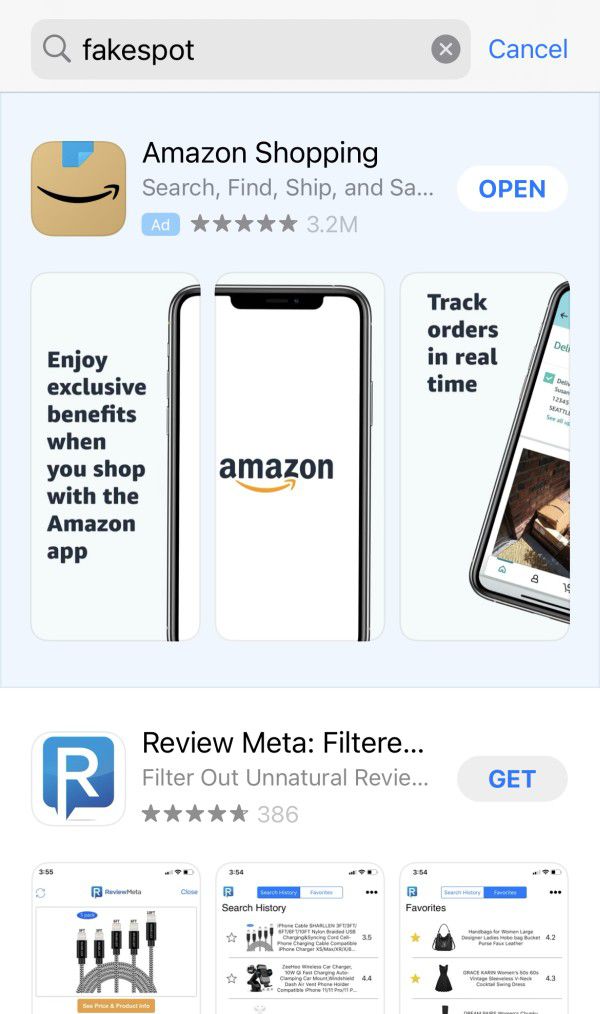 Fakespot, known for its web browser extensions that try to weed out fake product reviews, suddenly no longer has an iPhone or iPad app — because Amazon sent Apple a takedown request, both Amazon and Fakespot confirm, and Apple decided to remove the app.

The giant retailer says it was concerned about how a new update to the Fakespot app was “wrapping” its website without permission, and how that could be theoretically exploited to steal Amazon customer data. Fakespot founder Saoud Khalifah told The Verge that Apple abruptly removed the app today without any explanation. Apple confirms it removed the app, but disputes the circumstances.

The new Fakespot app launched just over a month ago, and I can confirm it let you log in to Amazon, browse, and buy items with Fakespot’s overlay on top. I downloaded and tried it a few weeks ago to see if it could help spot fake reviews on some new purchases, but I didn’t come to a conclusion on whether it actually helped.

Thank you to all of our users for making this new iOS app a reality. Together we will put an end to eCommerce fraud. We have more amazing products coming soon that will make secure shopping the gold standard for eCommerce. https://t.co/UyUnsOydzK

But in mid-June, says Fakespot’s founder, Amazon initiated a takedown notice. And just hours ago, says Khalifah, Apple finally delivered a blunt three-line email about how it regretted that the situation couldn’t be resolved amicably and that Fakespot has now been removed from the App Store. “We just dedicated months of resources and time and money into this app,” says Khalifah. “Apple hasn’t even given us the ability to solve this.”

Hours after we published this story, Apple told The Verge that’s not exactly true:

“This was a dispute over intellectual property rights initiated by Amazon on June 8 and within hours we ensured both parties were in contact with one another, explaining the issue and steps for the developer to take to keep their app on the store and giving them ample time to resolve the issue. On June 29, we again reached out to Fakespot weeks before removing their app from the App Store.”

Over the phone, Khalifah clarified that Apple did mention on June 29th that it “may be forced to pull” Fakespot from the App Store, but insists Apple never provided any other guidance, and that it was largely just conversation between Amazon and Fakespot where each argued their side before Apple yanked the app. “I’m shocked Apple decided to side with Amazon without any proof,” says Khalifah.

5.2.2 Third-Party Sites/Services: If your app uses, accesses, monetizes access to, or displays content from a third-party service, ensure that you are specifically permitted to do so under the service’s terms of use. Authorization must be provided upon request.

Amazon also tells us that Fakespot injects code into its website, opening up an attack vector and putting customer data (including email, addresses, credit card info, and your browser history) at risk, though it says it doesn’t actually know if Fakespot is using this information.

“The app in question provides customers with misleading information about our sellers and their products, harms our sellers’ businesses, and creates potential security risks. We appreciate Apple’s review of this app against its Appstore guidelines,” reads a statement from Amazon.

But while Fakespot admits the app injects code to display its own scores, he categorically denies there’s any vulnerability and points out that apps which include a web browser view are common — including coupon apps that Amazon seems to “have no problem with wrapping around a webview browser.” Amazon did, however, try to warn against browser coupon extension Honey by suggesting it was a security risk last January.

Regardless of why, it’s a blow to one of the major outspoken critics of Amazon’s review system, as Fakespot is regularly cited in reports about review fraud on Amazon. Amazon even bought search ads against the “Fakespot” keyword in the App Store to reduce the app’s potential impact:

“Amazon is willing to bully little companies like ours that showcase the cracks in their company,” Khalifah says, suggesting Amazon must have realized people were choosing their app over the Amazon app. He says Fakespot racked up 150,000 installs from the iOS App Store, without spending any money on marketing.

Amazon says it regularly audits companies that try to call out fake reviews and claims that Fakespot’s ratings are mostly wrong: “We regularly review products where Fakespot rated a product’s reviews as untrustworthy and their findings were wrong more than 80% of the time. They simply do not have the information we have—such as reviewer, seller and product history—to accurately determine the authenticity of a review.” Amazon suggests that it does a much better job of finding fake reviews itself by analyzing 30 million of them each week, though that clearly hasn’t stopped the fake and incentivized review problems yet — something we’re still investigating at The Verge.

Amazon wouldn’t say if it’s contacted Google about the Android version of the app, but that app hasn’t been updated since 2019.

Fakespot’s founder says the company is weighing its legal options now because it believes mobile is the future of shopping. “We’re seeing percentages of 60/40 now hovering in mobile’s favor,” Khalifah tells me.

“We will explore all the options we have available,” says Khalifah.

Cardi B Reveals She Wants A ‘Tummy Tuck’ 9 Months After Giving Birth To Son Wave: Watch

View gallery Image Credit: Diggzy/Shutterstock Cardi B is preparing to go under the knife to achieve her ideal body, she told fans on June...
Read more

View gallery Justin Bieber may be facing some serious medical problems, but his wife Hailey Baldwin is there for him! The “Beauty and a Beat”...
Read more

Red Sox hang on for 6-5 win over Blue Jays

TORONTO – The Boston Red Sox scored three runs in the 10th inning and hung on for a 6-5 victory over the Toronto Blue...
Read more