Comment on What Makes Laravel Framework the Best Choice for PHP Web Development? by Serena Martin 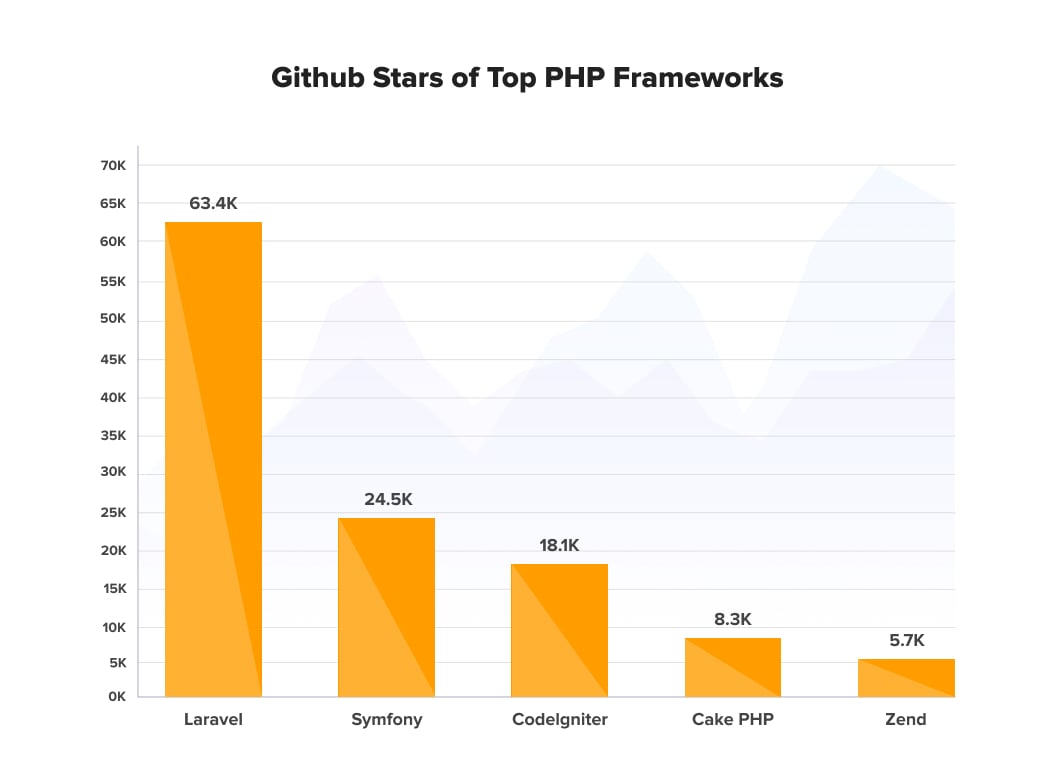 “Love beautiful code? We do too.”

Yes, we too love beautiful code, but this particular statement is not ours. It is the official statement of the Laravel framework – the most efficient and popular PHP framework known in the market for eliminating the pain out of development.

There are several PHP frameworks available in the market for developing robust web applications like Symfony, Yii, Codeigniter, Phalcon, and many others. But, Laravel has retained the first position in the list of best MVC-based PHP frameworks due to the ease and flexibility it provides to web developers.

Let’s dig deeper into what the Laravel framework is all about and what benefits it provides to businesses:

What is Laravel Framework?

Laravel is a web app development framework with expressive and elegant syntax that makes the entire web development process faster, easier, and enjoyable for developers by eliminating all the pain-points associated with handling complex PHP code.

It eases some of the commonly executed tasks like routing, authentication, sessions, caching, and others so that developers can focus on building business-related features of the app.

PHP frameworks’ market is a bit crowded because of several competitors fighting for limelight and attention. However, the robust Laravel features list is something that makes it stand out.

Laravel uses Blade template engine, which is simple but very powerful compared to other PHP templating engines. It adds zero overhead to your web app and doesn’t restrict you from using plain PHP code in views. Along with some convenient shortcuts for general PHP functions, it also provides features like template inheritance and displaying data that adds flexibility to the web development process.

Eloquent ORM in Laravel provides web developers with a simple ActiveRecord implementation that makes their interaction with databases easy and less time-consuming. It lets them write database queries using PHP syntax, and they don’t need to write or know SQL for updating or modifying databases.

Laravel is an MVC based PHP framework that ensures a tight separation between presentation layers and business logic. Being based on MVC, the framework provides many features like high performance, increased security, and scalability.

Though many PHP frameworks come with a price tag, Laravel is an open-source framework for web developers. Also, it has a powerful community that supports the framework to make it more advanced and flexible.

Laravel PHP framework is packed with many built-in object-oriented libraries that are full of amazing features for developers.

Along with these fantastic Laravel framework features, various reasons make organizations ready to go ahead with Laravel development services. These very reasons, or rather the benefits of Laravel Framework, are listed below.

Why Use Laravel Framework for Web Development?

A number of people ask why Laravel is so popular? The only answer to it is because they like the peace of mind while developing web apps, and Laravel provides much more than that. No doubt, its ease-of-use, and quality have helped it gain immense popularity but using this popular framework also paves the way for many other benefits.

Issues with other PHP frameworks have been well spotted, resolved, and incredibly well-tested in the case of Laravel. When it comes to testing, note that the PHP Laravel framework has integrated testing into it, making sure your web application is bug-free.

Here are some tremendous Laravel benefits that will make your web development a seamless and efficient experience:

For easing common tasks, PHP framework Laravel works on a modular basis. It implies that with Laravel, there are a lot of pre-built functions and structures that work on the latest PHP principles to build responsive web applications in a time-efficient manner. Since it is an open-source framework, developers have been in the process of improving these resources since the birth of Laravel in 2011. 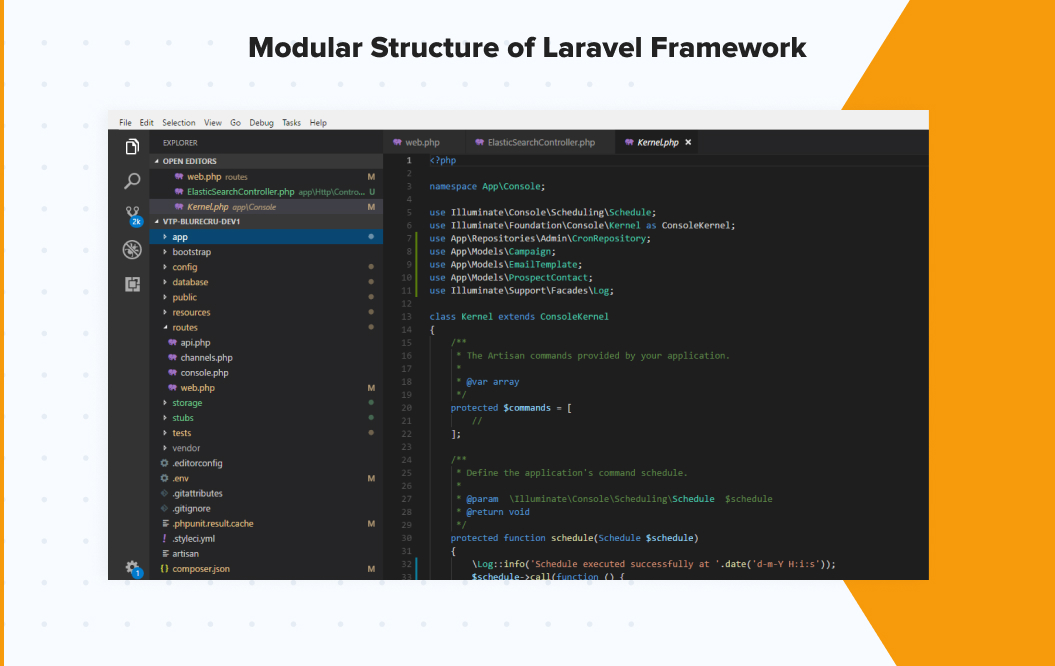 This speeds up the development process of web applications, making Laravel quick and intuitive. With the Laravel framework, there is no need to spend long hours and weeks writing individual lines of code. Therefore, it speeds up application delivery while also proves to be economical.

Wikipedia says, “Taylor Otwell created Laravel as an attempt to provide a more advanced alternative to the Codelgniter framework, which did not provide certain features such as built-in support for user authentication and authorization.”

Laravel framework makes it extremely simple and easy to implement a complete authentication system — Login, Registration, and Password Reset. You will be surprised to witness that Laravel does all this with the help of a single command. It also provides a simple way to organize authorization logic and control access to resources.

One of our clients, VOYlegal, a recruitment firm for lawyers, needed a job portal that could help lawyers and employers seek and post jobs respectively.

Initially, the whole architecture of the website was built using CakePHP. Because of the Laravel framework’s various benefits, like a simple way to organize authorization logic and control access to resources, we migrated VOYlegal website from CakePHP to Laravel.

3. Stay Away from Technical Vulnerabilities with Laravel Framework

The cost and time to fix these vulnerabilities increase exponentially as you progress through the software development lifecycle (SDLC). The following graph indicates the cost increase with inculcation of security vulnerabilities. 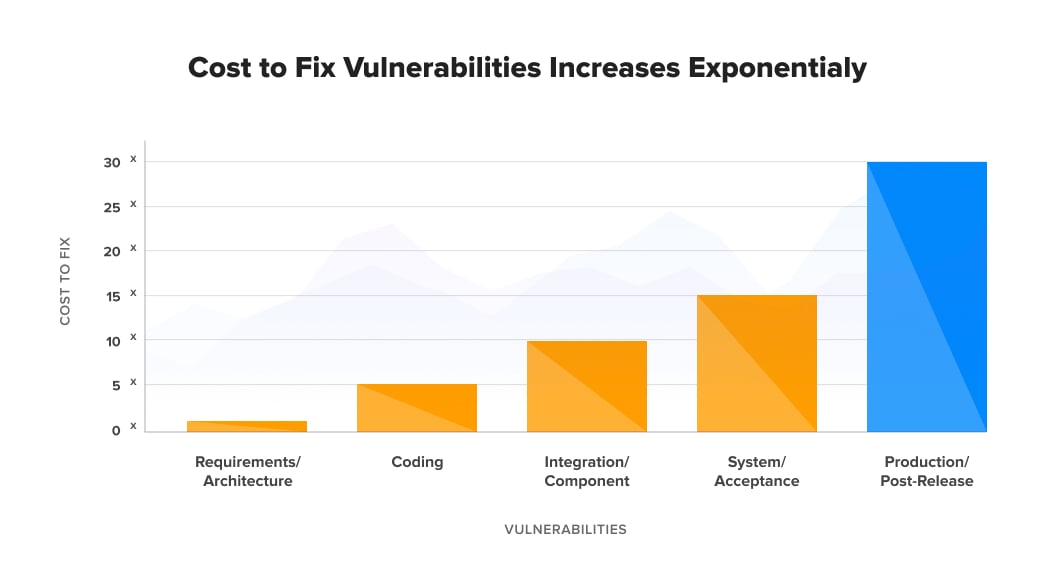 According to the graph, it is 30x times more expensive to eliminate vulnerabilities during the post-production phase than during the design, requirement identification, and architecture stage.

And when it comes to security, there is none other than Laravel that can secure your web application by protecting it against the most severe security risks: SQL injection, cross-site request forgery, and cross-site scripting.

So, why use Laravel Framework? Because it is super-secure and does not allow any malware activities or security threats to enter the web app. This simply implies that your PHP web app is completely secure with Laravel.

Laravel architecture is MVC based, and this is something that makes Laravel the best PHP framework for website development.

Here’s how the Laravel MVC works.

One of the significant advantages of the Laravel Framework is its extraordinary testing support. Without testing a web app thoroughly, you can not ensure that it’s bug-free and in accordance with the initial requirements alone.

To make sure that your web app performs well, Laravel Framework provides automation testing support, making it less time consuming to test an app. It offers simple ways for imitating users’ basic behavior (For example, making requests, analyzing outputs, clicking forms) that help you do expressive testing of your app.

The unit testing feature of Laravel lets you test each component or module of your app to ensure that the integrated application performs well when all the modules add up. This results in high-performing web apps with optimized web code.

Every web application needs a task scheduling mechanism to automate tasks when it is necessary. For example, sending emails to subscribers, notifications to app users, or only for cleanup of the database to make web apps faster.

In the past, web developers used to generate a Cron entry for each task they wanted to schedule. However, with Laravel, you can avoid this headache by using its automatic command scheduler. It allows you to quickly and expressively define your command schedule within the Laravel framework itself, and a single Cron entry is required on your server to execute the task.

Besides making your web app high-performing and faster, this feature of the Laravel framework also helps you save on the hosting cost.

The present situation is like this: the more the traffic a web app fetches, the more are the request numbers it should deal with each second. It means that the web application’s hosting will come under an expensive price tag or even the website server will stop functioning with data loss.

You must definitely not want to see yourself in such a situation.

PHP Laravel Framework supports message queue system for load balancing. The system helps maintain a healthy web server along with effective traffic management. Thus, it keeps a web server healthy – one of the many Laravel benefits.

The Laravel queue service provides a unified API across a variety of different queue backends. Queues allow you to defer the processing of a time-consuming task, such as sending an email, which drastically speeds up web requests to your application.

Is Laravel the Best PHP Framework?

Before the birth of Laravel, Codeigniter framework was the most popular PHP framework. But, it lacked some essential features like built-in user authentication and authorization. As a result, Laravel was born, and to date, it is considered as the best PHP framework for developing beautiful web experiences.

Though Laravel shines at the top in the list of best PHP frameworks and provides all the features mentioned above, Laravel vs Codeigniter is still a matter of debate among many web developers.

Here’s a comparison table to help you differentiate between the two:

Looking at the table, it is clear that Laravel provides many such features that Codeigniter doesn’t possess. But, Laravel also has some disadvantages and is certainly not the best fit for every web application.

It is a light-weight framework and offers less in-built support than Ruby on Rails and Django. While you can solve this problem by integrating third-party tools, the process of doing the same can turn tedious for large-scale websites. So, analyze your business needs and then choose the best PHP framework for your web app development.

Laravel Framework: A Robust Pillar for Your Web App

There is still no doubt in saying that Laravel nicely addresses the limitations of its predecessors. Laravel web development’s popularity is on the rise due to its incredible features—quickness, intuitiveness, high cost-effectiveness, and ability to build scalable web applications.

Having more than 60,000 stars on GitHub, Laravel provides extensive community support as well. With the help of a proficient Web Development Company, you can create a powerful web experience using Laravel and its amazing features.

The railroad crossing, on a dirt road without guardrails or a signal, sees a yearly average of one or two accidents, the authorities said.An...
Read more

Logistics in much of Southeast Asia is not only complicated, but also expensive. Deliveree wants to solve that problem with a platform that not...
Read more

Finished with Wordle? Want to shake up your routine with a new game? There are plenty you can check out.Wordle asks players to figure out a...
Read more