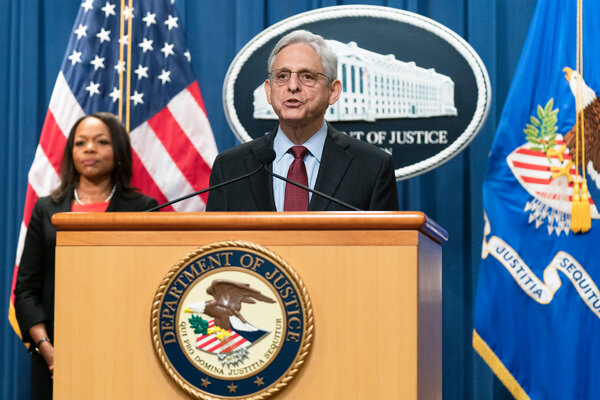 The police in Louisville, Ky., fatally shot Ms. Taylor during a nighttime raid on her apartment. Officials said two officers had lied in order to get a search warrant for Ms. Taylor’s home.

Federal officials on Thursday charged four current and former police officers in Louisville, Ky., who were involved in a fatal raid on the apartment of Breonna Taylor, accusing them of several crimes, including lying to obtain a warrant that was used to search her home.

During the nighttime raid in March 2020, officers knocked down the door and fired a volley of gunshots after Ms. Taylor’s boyfriend shot an officer in the leg, believing that intruders had burst into the home. Two officers shot Ms. Taylor, a 26-year-old emergency room technician, who was pronounced dead at the scene.

Attorney General Merrick Garland said at a news conference that the Louisville officers had “violated federal civil rights laws, and that those violations resulted in Ms. Taylor’s death.”

The killing of Ms. Taylor, who was Black, helped to set off protests in the spring and summer of 2020 after the police killing of George Floyd in Minneapolis, and led to intense scrutiny of the Police Department in Louisville.

Neither of the officers who shot and killed Ms. Taylor have ever been charged, nor are they named in the new indictments.

The charges instead name three officers who were part of an investigative unit that obtained the search warrant for the raid, along with a fourth officer who was later fired from the department because, officials said, he had fired blindly into Ms. Taylor’s apartment and struck a neighboring apartment.

That former officer, Brett Hankison, already faced state criminal charges in the case — the only charges filed over the raid until Thursday — but was acquitted. The new indictment accuses him of federal civil rights violations.

The bulk of the charges in the latest indictment surround the search warrant that police officers had sought in an investigation of Ms. Taylor’s former boyfriend, whom they had believed to be selling drugs.

Prosecutors said on Thursday that two detectives and a police sergeant had falsely claimed in an affidavit used to obtain the warrant that the former boyfriend had been receiving packages at Ms. Taylor’s apartment. In fact, according to the indictment, the officers had no evidence of such packages but misrepresented their case to the judge who authorized the raid.

One of the officers charged, Joshua Jaynes, a former detective who was also fired over his role in the raid, sent a draft of the affidavit to Kelly Goodlett, another detective now facing charges, in which he included the false claim about the packages, the prosecutors said.

Ms. Goodlett knew that the claim was false, the prosecutors said, but did not object to it, and also added what they described as a “misleading” claim that the former boyfriend was using the address to Ms. Taylor’s apartment as his current address.

The third officer charged, Sgt. Kyle Meany, who led a department investigative unit, approved the affidavit despite knowing that it contained the false information, according to the indictment.

The indictment accuses two of the officers of not only including false information in the affidavit, but also conspiring to lie about it afterward. Two months after Ms. Taylor’s death, prosecutors said, Mr. Jaynes and Ms. Goodlett met in Mr. Jaynes’s garage and decided to tell investigators, falsely, that a sergeant had informed them that packages were being sent to Ms. Taylor’s apartment.

Mr. Hankison was accused of depriving Ms. Taylor, her boyfriend and their neighbors of their rights by unreasonably firing 10 bullets through a window and sliding glass door that were covered with blinds.

View gallery Image Credit: Splashnews Josh Brolin is sexy and he knows it! The 54-year-old father of four flaunted his fit body via a...
Read more

If Diablo 4’s queen of hell is a spicy tomato, this Burger King ad gives me ideas

Audio player loading… Have you ever played a video game and thought to yourself, “Hey! That guy sure is the digital embodiment of a...
Read more