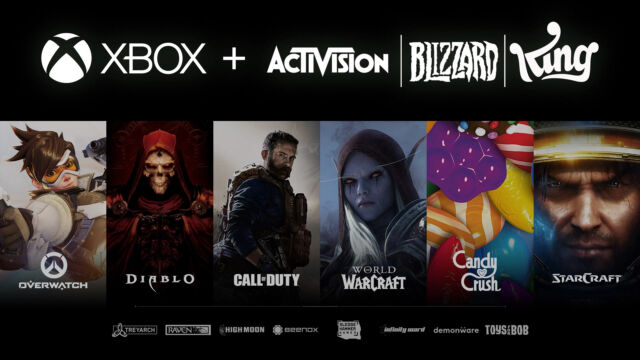 The Federal Trade Commission has filed a lawsuit seeking to block the proposed $69 billion merger between Microsoft and Activision Blizzard. By a 3–1 vote, the regulatory commissioners approved the filing of an “administrative complaint” showing they have “reason to believe” antitrust law is being violated and will argue as much in front of an administrative law judge.

Microsoft’s acquisition of Activision “would enable Microsoft to suppress competitors to its Xbox gaming consoles and its rapidly growing subscription content and cloud-gaming business,” according to an FTC statement.

The FTC’s lawsuit specifically calls out Microsoft’s previous acquisition of Bethesda Softworks parent company Zenimax, saying it’s part of a “record of acquiring and using valuable gaming content to suppress competition from rival consoles.” The decision to make Bethesda’s upcoming Starfield and Redfall exclusive to Microsoft platforms came “despite assurances [Microsoft] had given to European antitrust authorities that it had no incentive to withhold games from rival consoles.”

Microsoft has taken pains to suggest that the Activision Blizzard acquisition would be different on this score, promising to ship Activision’s bestselling Call of Duty franchise on competing PlayStation platforms “as long as there’s a PlayStation to ship to.” And just yesterday, Microsoft announced it reached deals with Nintendo and Valve to guarantee Call of Duty on those companies’ platforms for at least 10 years.

Those promises haven’t seemed to allay the FTC’s antitrust concerns, though. “With control over Activision’s blockbuster franchises, Microsoft would have both the means and motive to harm competition by manipulating Activision’s pricing, degrading Activision’s game quality or player experience on rival consoles and gaming services, changing the terms and timing of access to Activision’s content, or withholding content from competitors entirely, resulting in harm to consumers,” the government regulator wrote.

Ready for a fight

Microsoft has said that it is fully prepared to defend its acquisition in court. “We have been committed since Day One to addressing competition concerns, including by offering earlier this week proposed concessions to the FTC,” Microsoft Vice Chair and President Brad Smith tweeted in the wake of the lawsuit news. “While we believe in giving peace a chance, we have complete confidence in our case and welcome the opportunity to present it in court.”

In a Wall Street Journal op-ed published this week, Smith stressed that it is currently in third place behind Sony and Nintendo in the game console business and has “no meaningful presence in the mobile game industry.” Sony’s loud objections to the deal are akin to Blockbuster complaining about “the rise of Netflix,” as Smith put it.

In a message sent to Activision Blizzard employees and shared with Ars Technica, CEO Bobby Kotick acknowledged that the lawsuit “sounds alarming” but expressed “confidence that this deal will close. The allegation that this deal is anti-competitive doesn’t align with the facts, and we believe we’ll win this challenge… despite a regulatory environment focused on ideology and misconceptions about the tech industry.”

Microsoft’s acquisition still faces potential headwinds from overseas governments as well. Last month, the European Commission said it was moving on to an “in-depth investigation” of the deal. And in the UK, a similar “Phase 2” investigation by the country’s Competition and Markets Authority has scheduled a hearing this month. Those international investigations are expected to wrap up in March, when those bodies will decide whether to file their own attempts to stop the deal.

The filing of the FTC lawsuit was widely expected, with reports from insiders describing its filing as “likely” as recently as last month. A group of four US Senators wrote an open letter strongly urging the FTC to take a close look at the deal back in April, three months after Microsoft’s plans were formally announced.