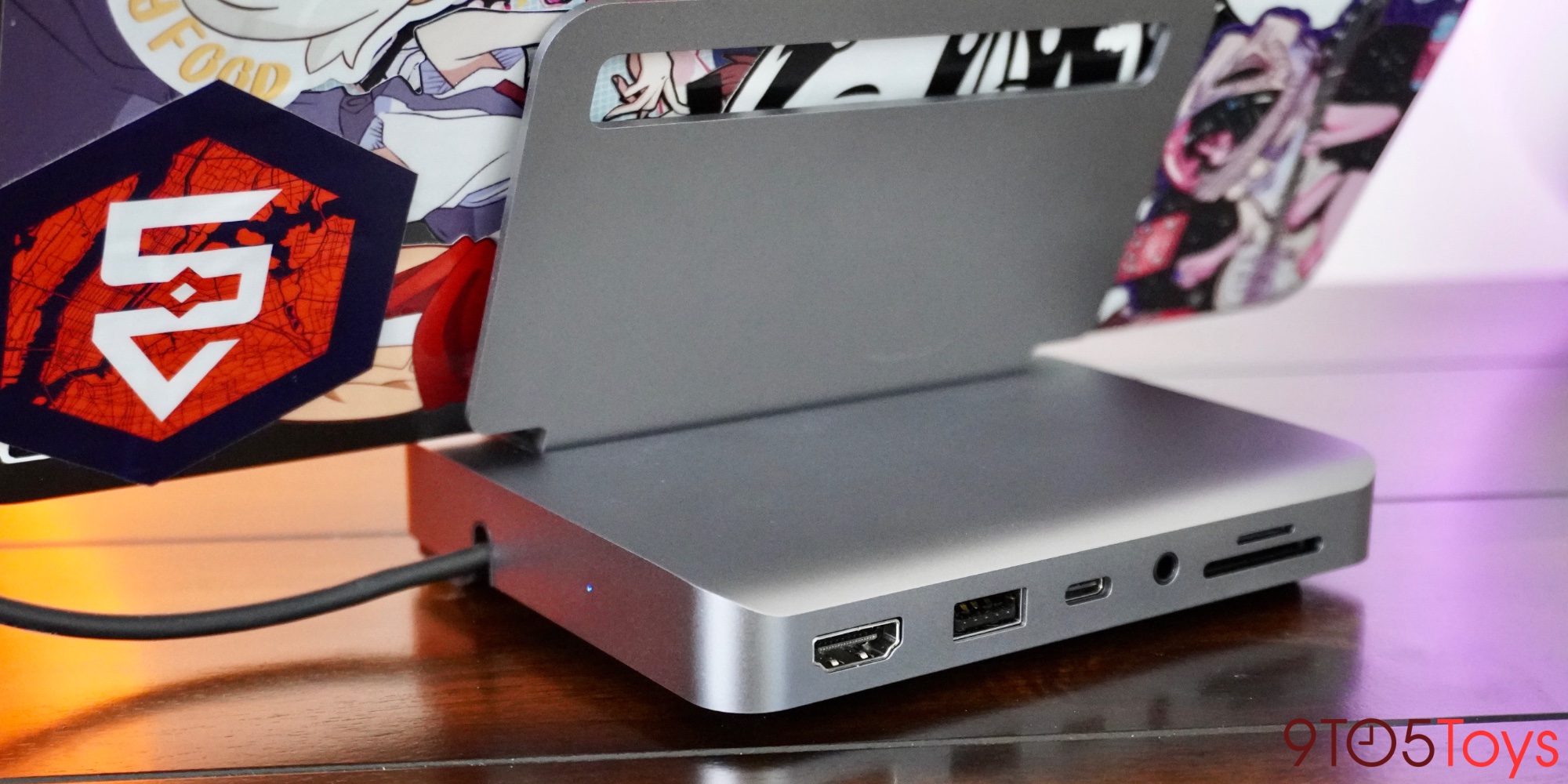 Satechi recently launched its latest iPad accessory, combining a desktop perch and a 6-in-1 USB-C dock with its new Stand and Hub. Looking to match the iPad Pro with a premium aluminum build, we’re taking a hands-on look at the recent release to see just how good of a desktop companion the hybrid accessory can offer. Head below for all of our first impressions on the Satechi Stand and Hub.

Hands-on with the Satechi Stand and Hub

After seeing Kensington debut its StudioDock hub for the latest iPads earlier in the year, the demand for a more affordable desktop solution for Apple’s most recent tablets was certainly realized. Not too soon after, Satechi launched its own take on the accessory, delivering a more compact form factor for use both at-home or on-the-go with a $99.99 price tag.

Entering as the Satechi Stand and Hub, the new 6-in-1 USB-C dock props up your iPad Pro or iPad Air alongside delivering some additional ports. As we’ve come to expect from the brand, you’ll find a signature aluminum build that fits right in with the iPads it’s meant to pair with.

Thanks to a built-in USB-C cable, you’re getting a selection of six additional ports. There’s notably a USB-C slot on the back for passthrough charging or plugging in another accessory, but also a 4K HDMI output. Alongside a legacy USB-A slot, you’re also looking at a headphone jack and SD card readers to round out the selection of rear-mounted I/O.

While USB-C hubs for iPads are nothing new since Apple released the past few iterations of tablets starting back in 2018, the new take offered by the Satechi Stand and Hub does introduce some more novel functionality. Folding out into its stand configuration, the accessory lives up to its name as a way to position your iPad Pro into a more desktop-friendly position. And then, when not in use, the entire package folds flat into a compact form that’ll easily fit in a drawer or backpack. There’s even a slot to hide the integrated cable, which is a pretty nice quality of life addition.

After Satechi’s latest for a spin over the past few weeks, I can easily say that the brand is certainly onto something with its Stand and Hub when it comes to desktop iPad usage. Having it at my desk alongside my iMac has been much more enjoyable of an experience than just relying on the iPad Smart Keyboard I’ve been rocking for quite some time.

I do a lot of photo editing on my iPad Pro, and the inclusion of a pair of SD card readers is certainly a perk for my particular workflow. And on the topic of I/O, Satechi definitely struck a balance here that I’m sure many will appreciate. For an iPad, there isn’t really more you could ask out of an expanded selection of ports. Some more extreme workflows may have benefited from an extra USB-C or USB-A slot, but for most of us, what you’ll find on the Stand and Hub is quite enough as is.

Though on the flip side, there are some areas where comprises do leave a little too much up to the imagination. The biggest thing for me is that the folding design doesn’t allow for multiple angles of propping up an iPad. The joint is, unfortunately, just loose enough that you pretty much only get the single position unless you can manage to balance things at an intermediate area.

Another limitation affects yet another way of how you can actually position your iPad, as the limited length of the integrated USB-C cable meant it can only be set up in landscape mode. So if there’s a use case where having your device aligned vertically might come in handy, you’ll have to unplug the hub.

All said and done, the Satechi Stand and Hub delivers some pretty compelling features for getting more out of your iPad Pro. It has a premium design to match and delivers plenty of I/O for photographers and the like, as well as the perk of keeping your tablet at a more ergonomic position.

Sure, there are some downsides. But the more affordable price tag compared to the no-compromise solutions out there is certainly a trade-off that I can imagine many will want to make. Its $100 price tag isn’t as affordable as just grabbing a more compact hub and simplistic stand, but there’s definitely something to be said for how well Satechi combined the two accessories into a single, premium iPad Pro add-on.

As is with the iPad Pro itself, the new Satechi Stand and Hub manages to deliver another piece of the professional workflow. Now, we just have to wait for Apple to update iPadOS in order to match the competing experience offered by this unique accessory.

Agents Are Blocked From Using Discretion in Deportation Arrests

The Biden administration had instructed ICE agents to focus on immigrants who were considered a threat. But a judge’s order means millions more could...
Read more