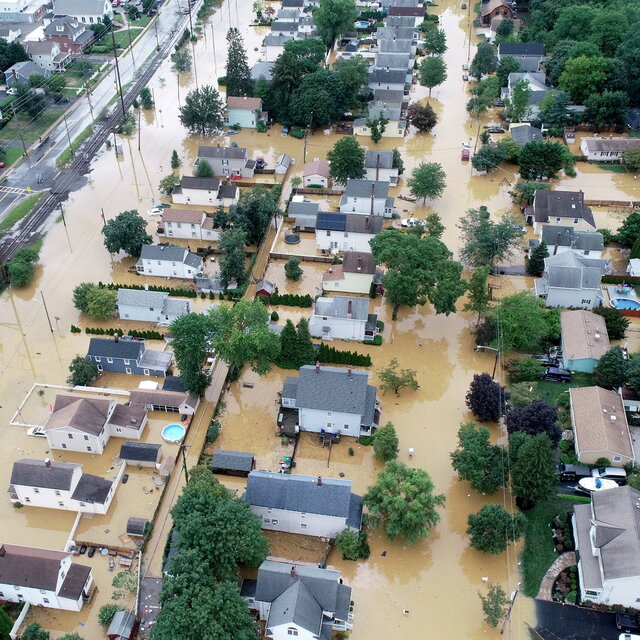 A day after the fierce winds of Tropical Storm Henri battered the Northeast, knocking out power to thousands and causing flooding from New York City to Rhode Island and beyond, the storm, now a slow-moving tropical depression, was expected to bring another round of heavy rains and flooding to portions of southern New England and the northern Mid-Atlantic States on Monday.

As of 5 a.m. on Monday, the system was nearly stationary and located about 60 miles north-northwest of New York City. It was moving east at one mile per hour with maximum sustained winds of 30 m.p.h., according to the National Weather Service.

“It’s stalled right now, but should begin moving slowly to the east later this morning and into the afternoon,” Dennis Feltgen, a meteorologist and spokesman for the National Hurricane Center, said on Monday morning.

He said the greatest impact from the system would be more heavy rain. About five to eight inches of rain had already fallen across northern New Jersey and in the New York metro area. Central Park set a record on Saturday for the most rain in a single hour when 1.94 inches fell between 10 and 11 p.m.

“Rain is still falling and will continue today,” he added. The latest rainfall totals included up to 6.32 inches of rain in Brooklyn, about 6.5 inches in Lyndhurst, N.J., and as much as 2.58 inches in Durham, Conn.

Henri is expected to drop an additional one to three inches of rain on Monday, with higher amounts possible in some areas, over portions of Long Island, New England, southeast New York, New Jersey and eastern Pennsylvania.

The rain will result in flash, urban and small stream flooding, Mr. Feltgen said. Flood warnings were in effect for northern New Jersey and southeastern New York State and elsewhere.

“Motorists should not attempt to drive around barricades or drive through flooded areas,” Mr. Feltgen said, noting that most flood deaths take place in vehicles. “Turn around, don’t drown,” he added.

Before it weakened, Henri was a tropical storm that slammed the Northeast on Sunday. The system wiped out power in most of coastal Rhode Island, forced evacuations in Connecticut, stranded dozens of motorists in New Jersey and shattered rainfall records in New York City.

The system, which made landfall in Rhode Island, spared the region the brunt of what was predicted. During its peak on Sunday afternoon, the storm left more than 140,000 households without power from New Jersey to Maine.

If you have over three hours to spare, feel free to watch the entire Game Awards presentation. If...
Read more

Anti-semitism has been getting worse over the last couple of years on the prairies. The regional director of Manitoba’s B’nai Brith, Dr. Ruth Ashrafi, tells...
Read more