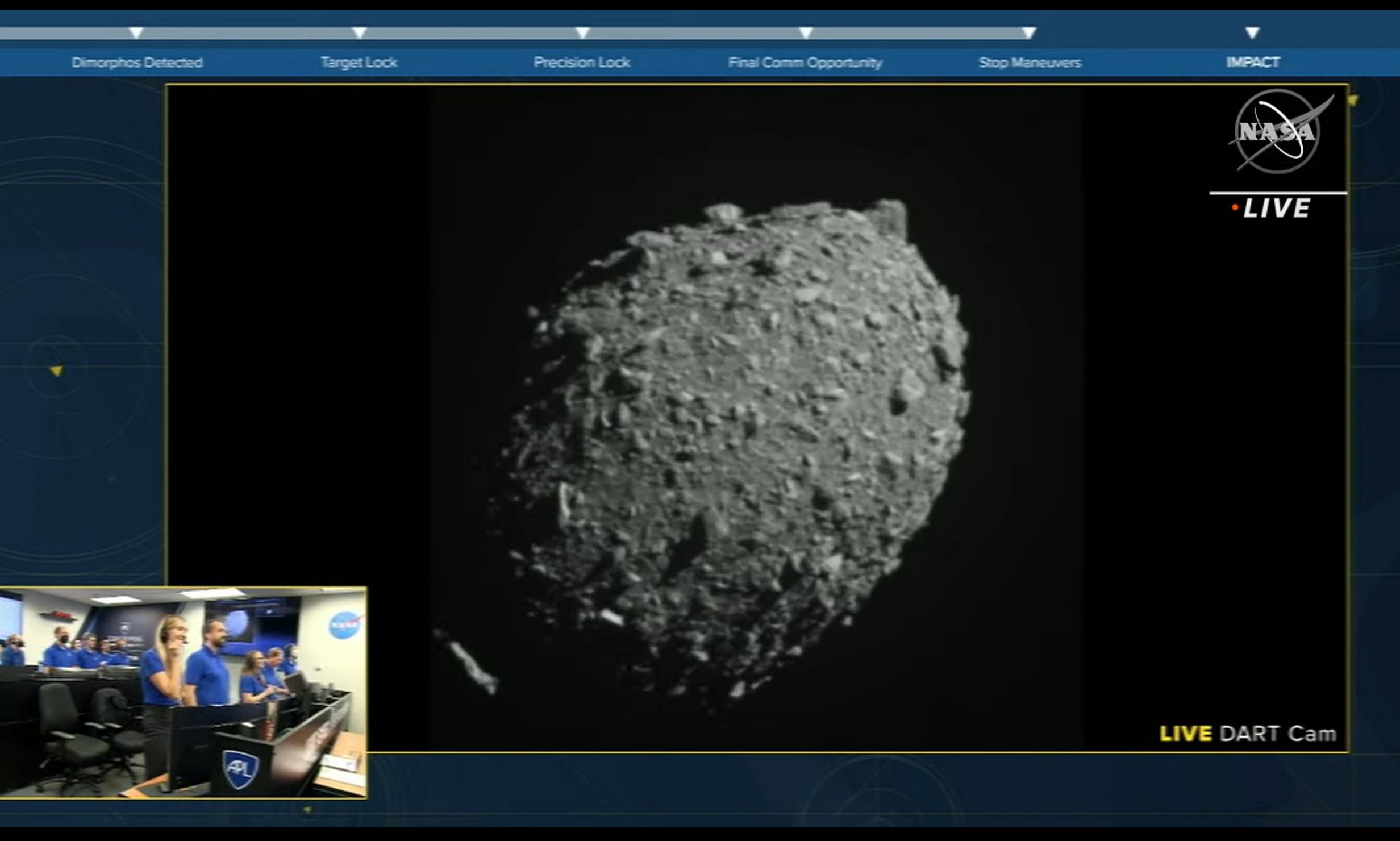 Nasa has successfully crashed a spacecraft into a small asteroid as part of a planetary protection test mission.

While this asteroid – named Dimorphos – posed no threat to Earth, the aim of the mission was to demonstrate that dangerous incoming rocks can be deflected by deliberately smashing into them.

The US space agency’s staff cheered and clapped in a video shared online as the vending machine-sized spacecraft successfully smashed into Dimorphos, which is the size of a football stadium.

‘And we have impact. A triumph for humanity in the name of planetary defence,’ a member of Nasa’s team said in a video recorded in the control room as the collision took place.

In a live question-and-answer session after the crash, senior leaders from Nasa and Johns Hopkins Applied Physics Laboratory said the mission was ‘straight down the middle’ and nothing went wrong.

Dimorphos is part of a binary asteroid system and orbits Didymos, which takes around 11 hours and 55 minutes.

But astronomers at Nasa hope that Dart, while destroying itself in the process, has shortened this orbital period by about 10 minutes.

It will take several weeks before scientists can say whether the experiment has worked.

Nasa previously said: ‘Dart’s target asteroid is not a threat to Earth but is the perfect testing ground to see if this method of asteroid deflection – known as the kinetic impactor technique – would be a viable way to protect our planet if an asteroid on a collision course with Earth were discovered in the future.’

There are currently somewhere around 27,000 asteroids in near-Earth orbit.

Rocks that are 140 metres (460ft) and larger in size and come nearer than 4.7 million miles (7.5 million km) during orbit are classed as potentially hazardous asteroids (PHAs).

The Dart mission was the first ever full-scale demonstration of asteroid deflection technology.

The spacecraft recently captured its first images of Didymos and Dimorphos using an onboard instrument, known as the Didymos Reconnaissance and Asteroid Camera for Optical navigation (Draco).

It was about 20 million miles (32 million km) away from the asteroid system when it took the photos in July.

It took 10 months for Dart to come close to Dimorphos after launching last November on SpaceX’s Falcon 9 rocket.

The asteroids were around 6.8 million miles (11 million kilometres) from Earth when the collision happened.

Dart accelerated at about 13,700 miles per hour (22,000 kilometres per hour) before colliding with Dimorphos.

The collision was recorded by a briefcase-sized satellite known as the Light Italian CubeSat for Imaging of Asteroids (LICIACube), which was provided by the Italian Space Agency.

LICIACube, which weighs just 14 kg (31 lbs), hitched a ride with Dart into deep space before recently separating from the spacecraft in a final farewell.

In 2024, the European Space Agency (ESA) will launch its Hera spacecraft, which will go on a two-year journey to the asteroid system to gather information in the aftermath of the crash.

ESA said: ‘By the time Hera reaches Didymos, in 2026, Dimorphos will have achieved historic significance: the first object in the Solar System to have its orbit shifted by human effort in a measurable way.’