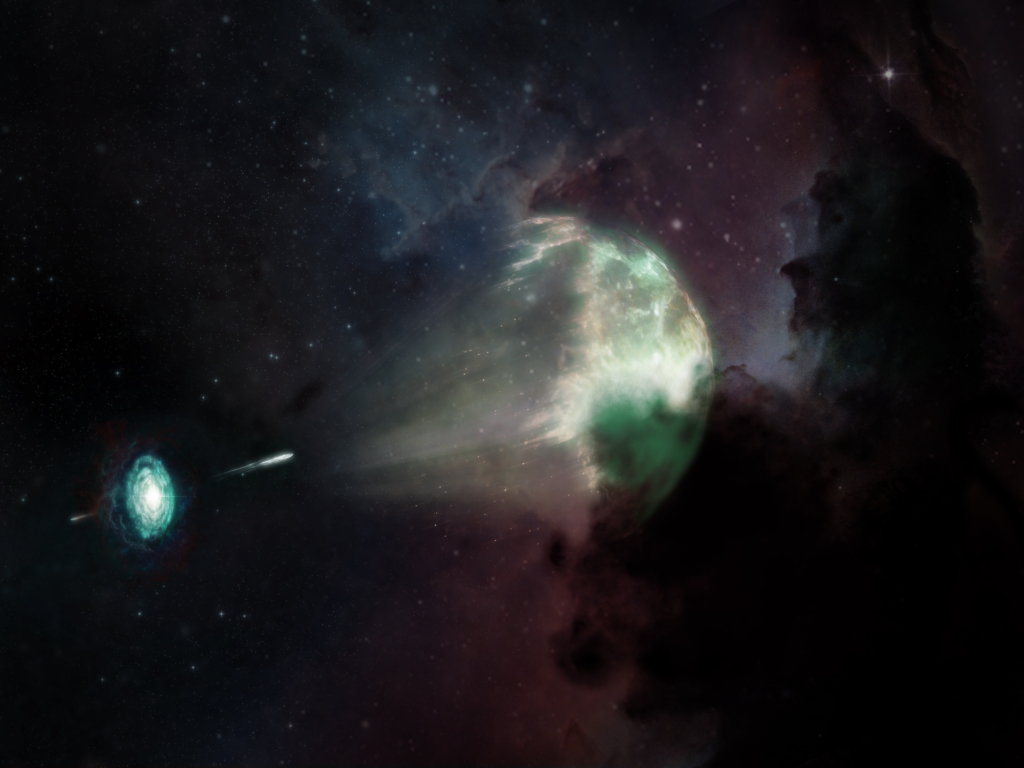 Astronomers have captured a powerful neutron star merger in world-first timelapse footage released by the US National Radio Astronomy Observatory.

The research team use an extremely sensitive array of radio telescopes to detect one of the most energetic short-duraction gamma ray bursts ever observed.

The array in Atacama, Chile recorded the explosive light down to tiny, milimetre-scale wavelengths for the first time.

Only half a dozen gamma ray bursts like this have been observed before, and those were recorded at longer wavelengths.

The result is a video showing the light from a neutron star colliding with another star approximately 20 billion light years away.

What is a gamma ray burst?

The most energetic explosions in the universe, gamma ray bursts can release more energy in a few seconds than the Sun emits over its entire existence.

They can take place when massive bodies like stars smash into each other, or when black holes are formed.

Short duration gamma rays like this one — dubbed GRB 211106A — usually last only a few tenths of a second.

‘These mergers occur because of gravitational wave radiation that removes energy from the orbit of the binary stars, causing the stars to spiral in toward each other,’ said researcher Tanmoy Laskar, who will shortly join the University of Utah as an assistant professor of physics and astronomy.

‘The resulting explosion is accompanied by jets moving at close to the speed of light.

‘When one of these jets is pointed at Earth, we observe a short pulse of gamma-ray radiation or a short-duration gamma ray burst’

The explosions leave behind a luminous afterglow in the surrounding gas that scientists can examine.

But they’re still really difficult to detect as they take place so far away. Even very luminous afterglows like this one still appear incredibly faint from Earth.

Less sensitive telescopes had already spotted GRB 211106A’s afterglow — but at the time, scientists didn’t know exactly what they were looking at.

This is because it was spotted on a X-ray observatory — Nasa’s Neil Gehrels Swift Observatory — which doesn’t capture light at the milimetre-wavelength level.

This meant astronomers couldn’t see the very distant galaxy the burst actually occurred in. Without knowing just how far away it was, they didn’t realise what a powerful source it must have had.

After combining information from a range of wavelengths, including new data from the Atacama Large Millimeter Array (ALMA), scientists now understand the afterglow in much greater detail.

‘Millimeter wavelengths can tell us about the density of the environment around the gamma ray burst,’ said Northwestern University’s Genevieve Schroeder, who coauthored a paper on the event.

‘When combined with the X-rays, they can tell us about the true energy of the explosion.’

Millimeter wavelengths can be detected for a longer time than x-rays, she added, allowing scientists to work out the width of the jets that accompany gamma ray bursts.

Data from the Hubble Space Telescope allowed scientists to finally determine the proper location of the burst.

‘The Hubble observations revealed an unchanging field of galaxies, [while] ALMA’s unparalleled sensitivity allowed us to pinpoint the location of the GRB in that field with more precision,’ Lasker explained.

‘It turned out to be in another faint galaxy, which is further away. That, in turn, means that this short-duration gamma-ray burst is even more powerful than we first thought, making it one of the most luminous and energetic on record.’

With even more powerful and sensitive telescopes coming online, it’s likely scientists will be able to learn even more about events like these.

‘With the James Webb Telescope, we can now take a spectrum of the host galaxy and easily know the distance,’ Lasker said.

In the future, astronomers will also be able to use the telescope to capture infrared afterglows and probe their chemical composition, he added.

You can read more about the research in a preprint on the academic arXiv server. The paper will also be published in The Astrophysical Journal Letters.


MORE : Russia is leaving the ISS program in 2024 to go build its own space station

Ted Lasso season 3: everything we know so far