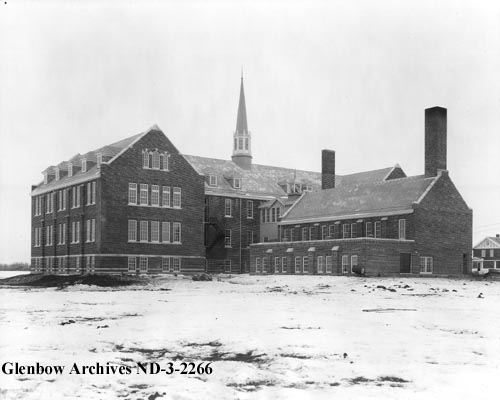 When Cristino Bouvette thinks of his kokum (the Cree word for grandmother), he calls her the most inspiring woman he has ever met.

Amelia Mae (Steinhauer) Bouvette, or “Mae” as most called her, lived to be 99 years old. When she passed, she left Bouvette her father’s suitcase that was filled with memories and pieces of his Indigenous history. Treaty cards, journals, photos that smell just as antique as they look, as well as a Cree hymn book.

But what was not included in that case of memories was any trace of Mae’s dark past. In 1929, she was taken from her family on the Saddle Lake reserve to the Edmonton residential school, which was run by the United Church until 1938.

“She’d sometimes say, ‘Oh, dear, I don’t like to talk much about it,’” Bouvette recalled.

“It was an immensely painful and tragic part of her life. It scarred her. There’s no doubt about that.”

Bouvette remembers one story his kokum told him about her brother in residential school.

“As a boy, he was at an adjacent building to hers. She was informed that he was dying of scarlet fever and that she was not going to be able to see him. As she described that to me, I just couldn’t comprehend: how you can tell a child that her brother’s dying, but you can’t see him, even through a window or something, you know?”

The painful history of residential schools has many feeling conflicted with some of the symbols that have come to be connected to it, including those from the Catholic church.

It’s what made Bouvette nervous to tell his kokum he was going into the seminary to become a Catholic priest. Just 18 years old at the time, he approached her with the news at her farm near Innisfail, Alta.

“I asked her once, point blank, after bringing in potatoes from the garden, how she would feel or if she would be offended, that I might become a Catholic priest.”

He said he will never forget her response.

“She just dropped the potato, she put her hand on my hand, and she said, ‘Oh my boy, nothing could make me more proud.’”

She continued to support him, even sitting in the front pew at St. Mary’s Cathedral in Calgary when Father Cristino Bouvette officially became a priest in 2012.

Her great grandfather was Reverend Henry Bird Steinhauer (1820-1884), one of the first ordained Indigenous people in what was yet to become a confederated Canada.

Steinhauer moved to Alberta from Ontario to translate the Bible and Christian hymns in the Cree language.

With the most recent discoveries of unmarked graves at residential schools in Canada, and the burning and vandalism of churches across the country, Bouvette said he couldn’t feel more pulled in two directions.

“I have gone on my own personal roller coaster of emotions in these last number of weeks, as I have, at various other times in our painful history, as our country confronts this,” he said.

“It’s not clear to me yet still, how I am supposed to try and bridge that gap. I’m one person in the Catholic church, and I’m one person among so many Indigenous people in Canada.

“I don’t know how I’m supposed to try and bridge that divide. But I desire intensely to do whatever I can through my whole life to do so.”

Bouvette said he knows the power of the emotion of anger through his work hearing confessions in church, and acknowledges the generational pain many are feeling.

“Anger cannot be just turned off or disregarded or put away,” he said. “I understand full well, where this anger comes from. And don’t think that because I’m a Catholic priest, I don’t experience it too. I have my own anger, at what I know have been institutional failures, what have been acts of imprudence.”

Bouvette now preaches about his life and family history, and the work that needs to be done on truth and reconciliation. He said he realizes the official apologies issued from within the Catholic church that date back to 1991 are not enough.

He also hopes Indigenous elders will continue to share their personal experiences to help us all listen and learn more about the past Canada is forced to confront.

“My goal, first and foremost, is to honor and respect my kokum, but I hope I can do that by showing anyone who’s willing to listen, that there is a sincere desire to continue to work towards healing and reconciliation in our country, and among our First Nations people.”

Such attacks are rare in the United States, typically occurring about once a year, but the latest one on Friday was the second in...
Read more