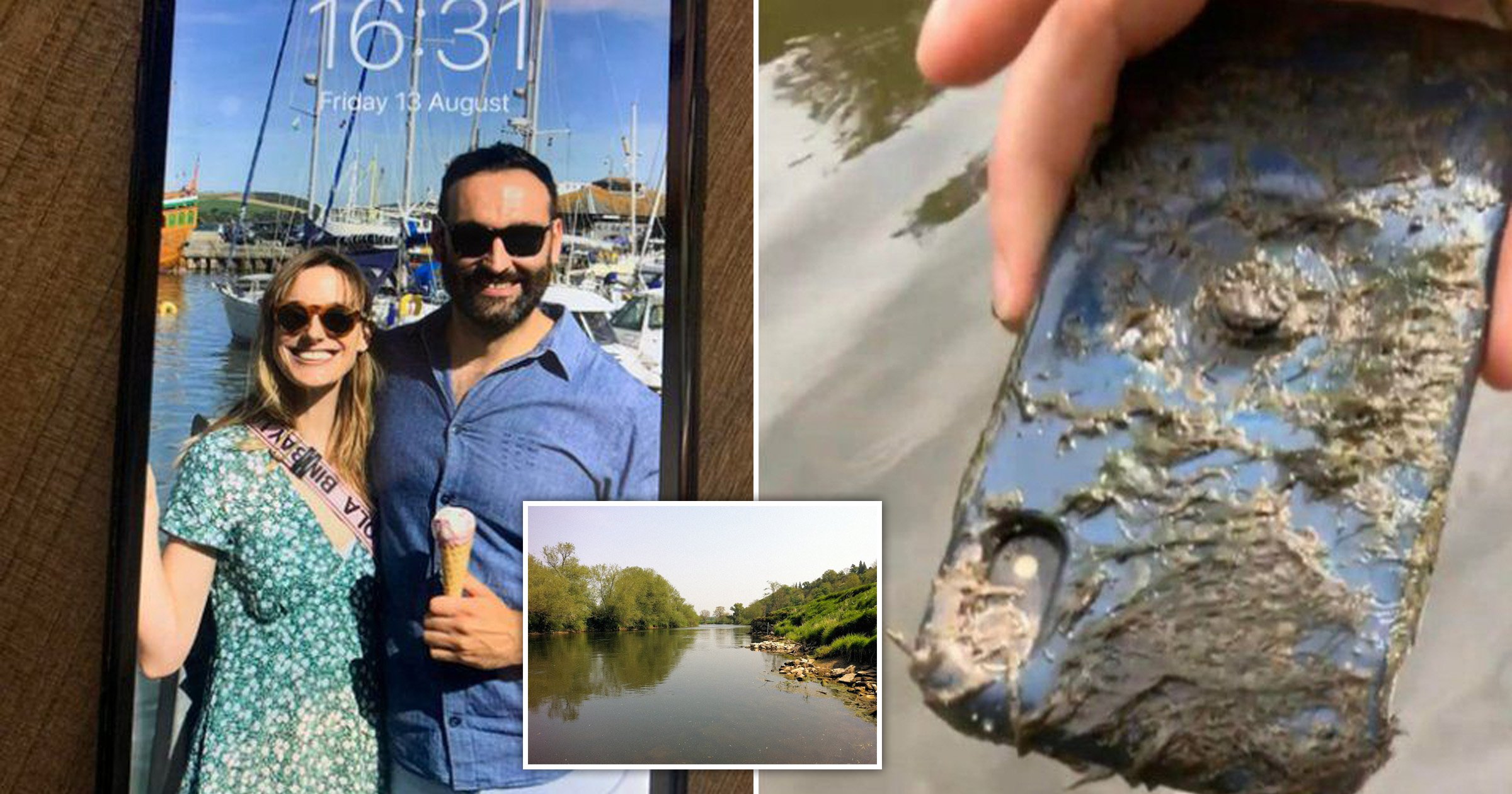 A man says it is a miracle of science that his iPhone still works after it was pulled, covered in mud and weed, dripping wet, from a river where he lost it ten months ago.

Owain Davies, 35, from Edinburgh, dropped the mobile when he and a pal fell overboard while they were canoeing during a stag do in Cinderford, Gloucestershire, last summer.

Now it’s been found in the fast-flowing, 20ft deep River Wye by Miguel Pachaco, who was canoeing with his baby daughter and spotted ‘something blue’ on the river bed.

Amazingly, Mr Pachaco, 29, managed to turn it on after drying it out and enlisted the help of his local Cinder Noticeboard Facebook group to try and find the owner.

He wrote ‘Found this iPhone in the River Wye when canoeing.

‘Looks as if it’s been in the water since August last year, as that’s the date on the front of it.

‘I took it home, opened it up and dried it out with an airline and then left it in the airing cupboard overnight to dry properly.

‘Put it on charge this morning and couldn’t believe my eyes. It’s actually working.

‘Would be nice to find the owner so please feel free to share.’

The screensaver showed a picture of a man and woman and displayed the date as August 13 – the day Owain lost his phone.

The post was shared on social media more than 4,000 times.

Despite its owner being off social media for months, the photo was eventually recognised by friends of Owain and his fiancée Fiona Gardner, who live in Edinburgh, and it has now been handed back to him.

Mr Pachaco, of Drybrook, Glos, admitted ‘I didn’t think it was any good – it was full of water.

‘But I did all I could to dry it out because there may have been sentimental things on it.

‘I know if I lost my phone, I’ve got a lot of pictures of my children, I know I’d want that back.

‘After drying it out, I put it on charge in the morning, and I just couldn’t believe it still worked.

Owain said ‘I was in a two-man canoe and my partner probably shouldn’t have stood up, and needless to say we fell in.

‘The phone was in my back pocket and as soon as it was in the water I realised the phone was gone.’

He was impressed Mr Pacheco had made such an effort to recover his phone.

‘My natural reaction would be to hand it into the nearest pub. It wouldn’t be to use my air compressor to dry it out and dismantle it.

‘Seriously though, I can’t believe it has been returned to me in working order.’

According to Apple, the iPhone XS and XR models are able to withstand being submerged in up to one metre of water for 30 minutes.

Clearly, the tech giant didn’t test for dunking its gadgets into a river for close to a year. But it’ll probably be happy to hear the positive result.


MORE : If you were using an iPhone in 2017 you could be awarded hundreds of pounds

The officially titled Zack Snyder's Justice League is now streaming on HBO Max, and it's coming to digital so you won't need a streaming...
Read more