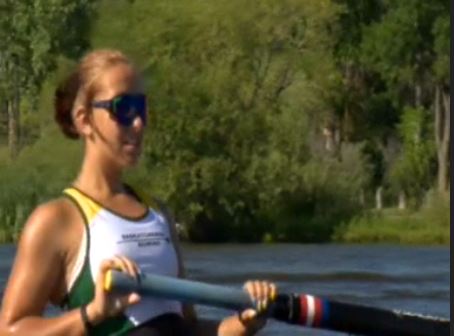 The Saskatoon Rowing Club held its ‘Head of the Saskatchewan’ regatta on Saturday, when teams from across western Canada competed. Nearly 175 rowers between the ages of 11 and 60 had to navigate the South Saskatchewan River.

“This was our first summer getting back into full swing. The recovery has been a process but very exciting,” said Andrew Knorr, the head high-performance coach for the Saskatchewan rowing association. “We certainly didn’t anticipate being as tired as we were throughout the summer, but it’s been really exciting.”

Team Saskatchewan athlete sacrificed other sports to specialize in rowing

Athletes began at the Saskatoon Rowing Club boat launch and rowed their way to Broadway Bridge before making their way back.

The event also gave the club a chance to show off its brand new dock, built with a grant from the federal government. But more importantly, Knorr said, he is just happy to be part of a regatta again.

“It’s nice to see people getting out of their houses and doing things, we’re even luckier to be able to go out on the river and be out on the water like this today,” said Andrew Knorr, the head high-performance coach for the Saskatchewan rowing association.

For Knorr, he said it is a great chance for the people of Saskatoon to see how big rowing has actually got in the province.

“Most people probably see us on the water once and awhile in the summer, but a lot of people don’t realize there is a rowing club and rowing in Saskatchewan has become a very strong and successful sport.”