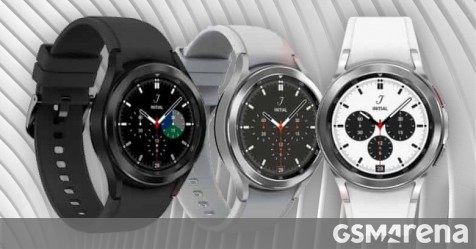 Last week we saw rendered clips showing the Galaxy Z Flip3 from all angles, now it’s time for the Galaxy Watch4 Classic to do the 360º twirl, thanks to @evleaks. Previously, we saw static renders of the upcoming smartwatch, but the video helps highlight the design changes from the Watch3.

Compared to the Watch3, the new model will have squared off sides and the wrist band have been redesigned to completely fill in the gap between the lugs. You can see the quick release pins that allow you to remove the bands without any tools. This does mean that you will need to buy proprietary bands, however.

Three colorways are expected: White, Silver and Black. The first two have a case with a natural metallic color, while the Black model has a case painted darker to match. You can see the optical sensor at the bottom of the watch – that will measure pulse and SpO2 (blood-oxygen saturation). This year Samsung is allegedly adding a body composition monitor thanks to a Bio-electrical Impedance Analysis sensor (BIA, you may have seen these on smart scales).

Cast your mind back, if you will, to the joyous era of Star Wars fandom that followed sequel trilogy opener The Force Awakens' 2015...
Read more