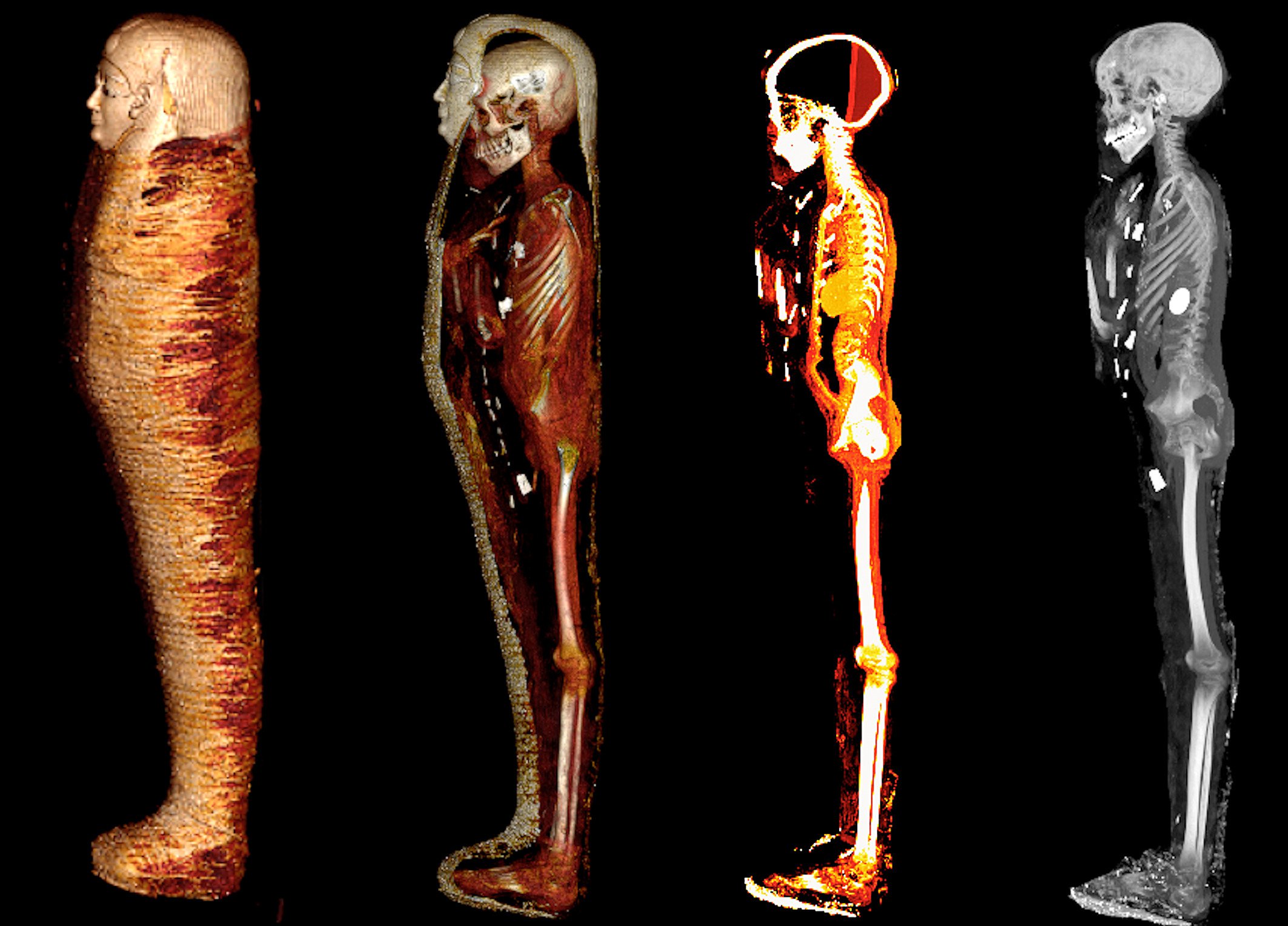 Scientists have ‘digitally unwrapped’ the mummified body of a wealthy ancient Egyptian ‘golden boy’ from 2,300 years ago.

The boy, who is believed to have been 14 or 15 when he died, was about 4 feet and 2 inches tall, having died of natural causes.

On his body, they found 49 amulets of 21 different types, suggesting that wealthy ancient Egyptians were given scores of amulets when they were mummified in the hope it would speed their journey to the afterlife.

‘Here we show that this mummy’s body was extensively decorated with 49 amulets, beautifully stylised in a unique arrangement of three columns between the folds of the wrappings and inside the mummy’s body cavity,’ said the study’s first author Dr Sahar Saleem, from Cairo University.

The scientists in Egypt used CT scans to discover the amulets which included the Eye of Horus, the scarab, the akhet amulet of the horizon, the placenta, the Knot of Isis and others.

‘Many were made of gold, while some were made of semi-precious stones, fired clay or faience. Their purpose was to protect the body and give it vitality in the afterlife,’ said Saleem.

The mummy was laid in an outer coffin with a Greek inscription and an inner wooden sarcophagus.

The boy wore a gilded head mask, a pectoral cartonnage that covered the front of his torso and a pair of sandals.

The sandals were probably meant to enable him to walk out of the coffin because, according to ancient Egyptian funerary text The Book of the Dead, the deceased had to wear white sandals and be pious and clean before reciting its verses.

Ancient Egyptians believed in an afterlife to which entry was not guaranteed. People needed to undertake a perilous journey through the underworld before a final judgment, with friends and relatives doing everything they could to ensure their loved one reached their destination.

Ferns were garlanded around the mummy’s outer surface because the ancient Egyptians believed flowers and plants had sacred and symbolic meanings, while the amulets are a testament to a range of ancient Egyptian beliefs.

A golden tongue leaf was placed inside his mouth to make sure he could speak in the afterlife while an Isis Knot enlisted the power of the goddess in the protection of the body.

In addition, a right-angle amulet was meant to bring balance and levelling, and double falcon and ostrich plumes represented the duality of spiritual and material life.

A golden scarab beetle was also found inside the chest cavity, used to silence the heart on Judgment Day so it would not bear witness against the deceased.

The mummy was found in 1916 at a cemetery used between approximately 332 and 30 BCE in Nag el-Hassay, southern Egypt.

It had been stored unexamined in the basement of the Egyptian Museum in Cairo.

To get a roundup of TechCrunch’s biggest and most important stories delivered to your inbox every day at 3 p.m. PST, subscribe here. Kicking off...
Read more

Toronto’s cycling network grew during the pandemic, as temporary expansions intended to give residents more space outdoors were made permanent. A stretch of the ActiveTO...
Read more

Audio player loading… Intel has steered a bumpy road with its Arc Alchemist graphics cards, but a forthcoming driver update might offer a sizeable...
Read more