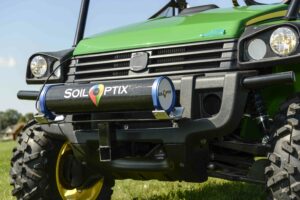 At the  opening last month of Pace Port Toronto, the fifth global research and co-innovation centre operated by Tata Consultancy Services (TCS), K. Ananth Krishnan, the company’s chief technology officer, recalled an astute piece of advice he once received from his friend and mentor, the late Dr. Clayton Christensen.

“Don’t get excited only by technology,” Christensen, a Harvard professor, known as the “guru of disruptive innovation,” who was appointed an independent director and member of the TCS supervisory board in 2006, told him. “But by which people actually use it in their daily lives.”

When it comes to farming and AI, anywhere in the world where crops are grown – be it in the Middle East, in India, northern Dakota, Saskatchewan or southwestern Ontario – that approach is being followed by TCS’s research and innovation (R&I) teams to the letter.

During a presentation that took place at the Pace Port event following the formal speeches and ribbon cutting ceremonies, Chiranjib Adak, head of the company’s BFSI (banking, financial services and insurance) Canada Business Technology Solution, outlined some of the farming advances researchers are involved with globally.

Chief among them is the use of satellites and drones as part of a sky-and-earth convergence initiative that can be used to test the quality of soil, not field by field, but over a wide geographic area.

The key, said Adak in an interview with IT World Canada, is first to acquire the data using drone or satellite technology and then follow that through a process that uses machine learning and real time data processing that generates advisories in different forms. One might be to a farmer who can be advised on the nutrient profile of soil and whether it is deteriorating or improving.

“There is the crop growth and yield forecast, which helps both banks as well as farmers,” he said. “Another angle in terms of AI usage is this whole notion of spatial data we use on farms, which is superimposed with weather forecast models. When we do that, we are able to see that certain (types) of weather make a crop more vulnerable to fungus or bacteria or pests.

“We are focusing on both improving the food production and crop yield and also creating a platform that allow farms to conduct better crop planning and production.”

In India, meanwhile, many breakthroughs are evolving through TCS Digital Farming Initiative (DFI), a project with a mandate of improving crop production and efficiency through technological advances.

“DFI personalizes its solution to the level of each farmer and field by bringing the earth to the cloud through the unique intersection of advanced remote sensing and IoT technologies. This enables scalable, affordable, accurate and high-tech/low touch solutions.”

An example of local high-tech advances was on display at the Pace Port Toronto event from an organization called SoilOptix Inc.

Based in Taverstock, Ont., the company’s technology offering, it says, “involves a standard four-step process that includes soil mapping, extraction of soil samples, processing and the retrieval of results.

“The resulting data can be used for multiple purposes including variable rate application of fertilizer or seed, precise management of water, or more informed practices around field scouting. In some instances, historical field management (or lack thereof) can influence the present-day decisions growers may make in their fields.”

Paul Raymer, CEO and founder of the nine-year-old company, said during the demo that within this “fancy tube” is some sophisticated technology: “It acts like a sponge. Soil gives off a natural radiation that we can’t taste, smell, or feel as humans, but this instrument can. It digitizes the energy coming out of the soil.”

AI advances are being introduced into the SoilOptix offering, including automating a mapping process that in the past could only be carried out by humans.

“Over the past two-and-a-half years we have had a development team specifically working on an AI engine that helps offload the monotony that a human faces,” he says.

“What happens is the data from the field comes in through our servers and the AI engine sees it firsthand. It does the analysis.

“For the training that it has, to date it will spit out the field results in a matter of seconds. But if anything is off that it doesn’t understand, then it kicks that field off, and it then goes into our production team’s hands to help finish the process. Over the course of time, we’re going to be continuing to increase the training for the intelligence of this AI, so that it can be doing more and more of the work.”

In terms of the company’s channel strategy, Raymer says a decision was made long ago to build up a partner network and for one specific reason.

“Farmers are inundated with all sorts of different technologies,” he says. “They are going to listen to someone they can trust.”

Deliveroo said it plans to pull out of the Netherlands as the British food delivery company reported widening pre-tax losses compared to a year...
Read more