The farmers market is moving online 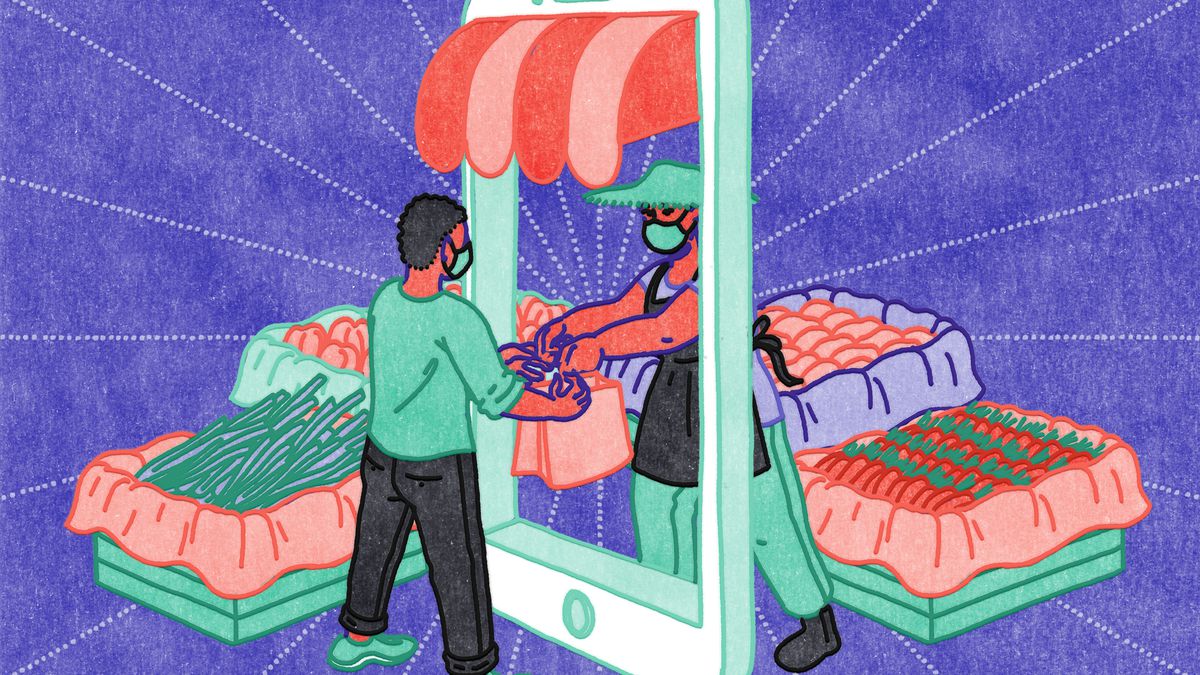 For the past two decades at Crystal Organic Farm in Newborn, Georgia, a typical Saturday morning involved Nicolas Donck and, later, his partner in farming and in life, Jeni Jarrard, getting up at 4AM, loading up the truck with tables and tent and coolers and bins of eggs, peppers, okra, melons, herbs, flowers, or whatever was good that week, driving the hour to Atlanta, and spending a day in whatever weather — including sweltering heat, pouring rain, or bitter cold — before hauling the hour back, happy from feeding their community the food they spent all week growing, but also exhausted, and just a few hundred bucks richer for it.

Then the pandemic came, and it hit farms hard. Supply chains, customer bases, and in some cases labor were upended. Small and medium-sized independent farms that relied on restaurant wholesale lost huge percentages of their business overnight. Some local CSAs folded. Some farming operations went belly up.

Others, however, found a new path online. Farmer-specific e-commerce apps and services — among them, GrazeCart, Farmdrop, Farmigo, and GrownBy — have cropped up in recent years, offering the direct-to-consumer sales, customizable CSAs, preorders and delivery that farmers markets haven’t. When the pandemic began, this tech offered a new world of possibility.

Donck and Jarrard were among the farmers who took the leap. When food distribution chains collapsed and people turned to local food, the pair made the snap decision to eliminate their old-school CSA program, lean into their relationships with two tech-based distribution platforms with which they’d already worked, and transition the rest of their business to sales and distribution platform Barn2Door. Now, late-pandemic farming looks like skipping the market, staying in bed for hours longer on Saturday, and enjoying a cup of coffee together — all while quadrupling business by selling online.

Does this ever-expanding landscape of food distribution tech make the job easy? Not in all ways, says Donck. “There’s always room for improvement. For example, everybody wants cucumbers, but we don’t have any right now,” he says, lamenting the loss of a week’s crop to a swarm of squash bugs. “[Our customers] will have to go somewhere else for those.” But he and Jarrard agree, they don’t intend to go back to the way things were before.

They’re not alone. One of three digital platforms they now work with, Barn2Door, reported a 457 percent increase in revenue from orders and an 807 percent increase in the number of orders among their sellers in March 2020 alone. (In August, they ran a $6 million funding round to try and keep up.) Another — an online shopping platform called Fresh Harvest, which processes orders and facilitates door-to-door delivery across Georgia, and which Donck estimates constitutes some three-quarters of Crystal Organic’s business — tripled its year-over-year revenue in 2020, bringing in $4 million.

This massive growth spans the sector: Harvie, which facilitates the direct sale and delivery of customized farm shares, launched 13 years ago. This past year, the company saw a 500 percent year-over-year increase in its farmers’ sales and quintupled the size of its team. WhatsGood, an app that facilitates purchase and pick-up between consumers and local fishermen, farmers, and foragers, grew from some 30,000 buyers to around 200,000 between January 2020 and December, according to founder Matt Tortora. The founder of Food4All, a platform designed to help farmers integrate all these other platforms, estimates growth in the past year and a half by a factor of seven.

As with so many other shifts the pandemic accelerated, this growth shines a light on trends that were already in play: the waning of farmers market attendance; the growing demand for home delivery. “Farmers markets were really a counterproductive business model for a lot of farmers,” says Tortora, a former chef who founded WhatsGood in 2014. In recent years, farmers markets across the US reported a “downward trend,” with year-over-year attendance and sales down by between 20 and 70 percent as of 2018, even while interest in locally sourced food has ticked upward.

As this trend progresses, a growing number of local chefs, and eventually consumers, have come to apps like WhatsGood to connect with independent producers online. On Tortora’s app, they can browse local goods on the web or in the mobile app, fill a digital cart, check out in a single transaction, and then pick up their goods at a local hub — which might be a brewery donating space in its off hours, a single farm, or farmer’s market. In 2018, the company piloted a delivery business model, which yielded “holy shit numbers,” Tortora says. “It was a real ‘ah ha’ moment. Meat producers that would bring in $1,000 a day at farmers markets made four to five times that on their first day offering delivery.”

While acknowledging that the last year was all kinds of terrible, the couple behind third-generation family-owned Ever-Breeze Farm in Westerly, Rhode Island, have to agree: Local food thrived. John Panciera, who runs his family’s dairy and grass-fed beef farm with his partner Bianca Lee Paredes, says the pandemic changed their community’s attitude, boosting customer interest and appreciation for locally sourced goods.

“I’ve been hesitant to say this to certain people, but COVID was really good for business,” Panciera says. “We just happened to take a chance, doubling the size of our flock last spring, and thank goodness we did, because as many eggs as we sold, we could have sold more.”

While, thanks to Paredes’s thinking outside the box, Ever-Breeze had already started to use WhatsGood for a sliver of their business pre-pandemic, they still largely relied on walk-in sales, peddling goods out of an old milkhouse on an honor system, in which customers would scrawl their names and purchases in a spiral-bound notebook and shove cash into a slit-topped coffee can. This made for chaotic energy, the couple recalls, with a dozen or more cars coming in and out of the driveway at all hours. Plus, it was a system that proved hard to scale.

Come spring of 2020, Panciera and Paredes decided to ditch the chaotic driveway model altogether and pivot their focus to digital distribution, which, within months, led to growing their egg market, scaling up their beef business, and even hiring their first-ever employee. In the app, Ever-Breeze’s products can reach customers from Massachusetts to eastern Connecticut — and the supply chain still feels as local as can be. “We’re being afforded this direct-to-consumer relationship,” Paredes says. “I know the names of the people I’m feeding, and that’s a big deal to me. If I stocked a grocery store in town with our beef, would I sell it? Probably, but would it feel the same? I don’t think so.”

The transition hasn’t been completely breezy, riddled with learning curves from permitting and expiration dates to needing unprecedented levels of consistency in their operation. And for the farmers attempting to combine and balance multiple of these apps in order to walk the tightrope between maximizing sales and meeting demand, those learning curves are even steeper.

The platforms are trying to ease the friction. “In a lot of ways, this is a horrible business,” Harvie founder Simon Huntley says. “You’ve got perishable products, you’ve got high cost of goods sold, high labor costs, high capital costs, high delivery costs, low profit margin… If you get it exactly right, it’s great — but you have to get it exactly right.” Tech that can meet those challenges goes far beyond your basic e-commerce, and this niche corner of the tech world, he noted, is “littered with the corpses” of many venture capital-backed projects that came before, spent millions on product, and have “nothing to show for it.”

While they perfect their methods, farmers are along for the ride. Despite two decades of doing things a certain way in Newborn, Donck and Jarrard have zero plans to go back to the market if they can help it, focused instead on perfecting the balancing act between platforms.

Likewise, Panciera and Paredes are committing to the new models they adopted last spring. But already, things are starting to feel different. To keep up with the new volume, and the flock and livestock they planned around it, there will be no resting on their laurels. “We’re not looking back,” Panciera says. “But this year has shown us that, all right, you got lucky last year. Some of this just fell into our lap. But this year, we’ve had to start marketing a little harder now than we were,” he says. “From here on out, it’s going to be a different story.”

The winners of the Event Supplier and Services Association’s (ESSA) 2022 Awards were...
Read more

Roughly 1 in 7 police officers in the U.S. are women, according to federal data, and the Justice Department is trying to learn why...
Read more