This E-Scooter Strikes a Balance Between Price and Comfort 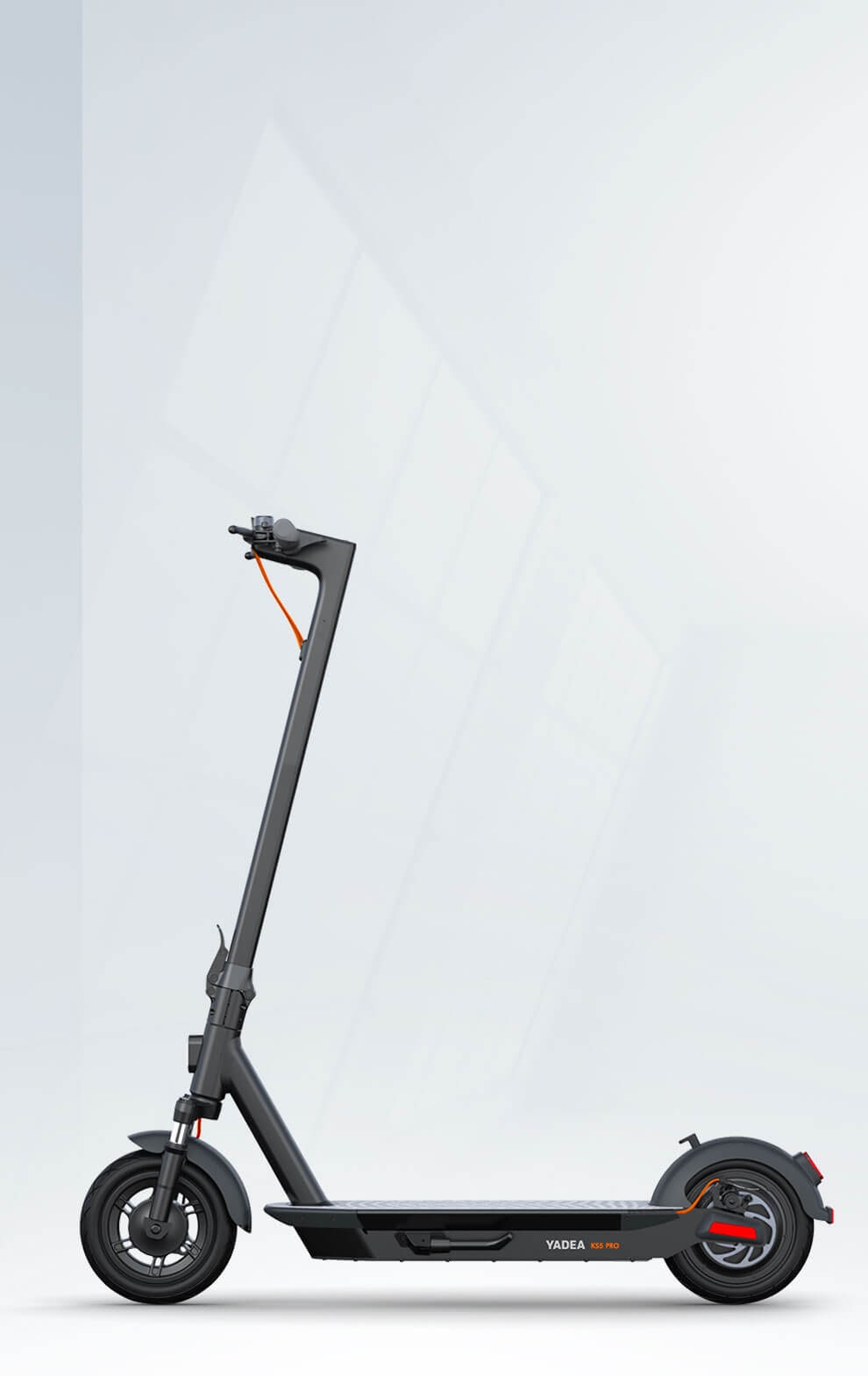 This electric kick scooter packs just enough power and functionality, but it has a few flaws.

I’ve been testing a lot of electric kick scooters this year, and Yadea’s KS5 Pro is one of the first to offer a nice compromise between virtues. It’s not incredibly powerful and extremely heavy like the 64-pound Apollo Ghost, but it’s also not so lightweight that it violently shakes over the smallest pothole like the Slidgo X8.

It’s somewhere in the middle, offering a comfortable ride with just enough power for anyone in a city without too many steep hills. Its $759 price reflects that. But it’s not without flaws. Its range could stand to be better for the price, a few features are tied to the app, and I really don’t like the way you control functions on the display. Oh, it’s also still fairly heavy.

Get Up and Go

Simple unboxing experiences can be a double-edged sword. The KS5 Pro arrived in one big box at my doorstep, but unlike some e-scooters I’ve tried, it didn’t come chock-full of styrofoam to keep the whole thing protected during shipping. The unboxing process was quicker and a lot less messy (no styrofoam sticking to every object in your home!), but I also noticed that the tiny tip of the rear fender had broken off. Keep an eye out for that.

As you may have noticed, this is the Pro version, which means there is a standard KS5 too. That version has a 350-watt motor with a top speed of around 18 miles per hour, whereas the Pro has a 500-watt motor and a top speed of 22 mph. The standard version also has a smaller battery; for that reason alone, I recommend that you spend the extra $120 on the Pro (more on this later).

All you need to do is attach the top handlebar, which has an integrated display, with the included hex key and four screws. But you may need to adjust the rear brake’s strength. Weirdly enough, the included hex key doesn’t fit the nuts on the brake, so I had to use my own.

Folding it up is straightforward. Push a lever at the front of the stem and undo the clamp, then bring the stem all the way down. You can hook the handlebar to the rear fender, which makes it much easier to carry. However, when it’s just sitting in its folded state, the stem doesn’t stay hooked, which can look sloppy.

I like being able to pick up my e-scooter and take it into a shop (instead of taking the risk of parking it outside on New York’s streets), and that often means lifting it up a few stairs. The KS5 Pro isn’t as hefty as some e-scooters I’ve ridden, but 46 pounds isn’t exactly lightweight. It’s manageable but a good reminder that I should probably hit the gym sometime soon.

Yadea, a Chinese company known for its traditional Vespa-like electric scooters, did a fine job with the hardware here. The KS5 Pro looks slick with its orange-and-black theme, and there’s a white-and-orange version if that’s more your speed. The handlebar’s height isn’t adjustable, but it fit me—I’m 6′ 4″, and I didn’t need to stretch out my arms like a zombie to reach them. It may be a tad high for you, though.

The roomy deck can fit both my feet one in front of the other, the kickstand is reliably sturdy, there’s a great built-in bell, a surprisingly bright front light, and an always-on taillight. There’s enough room on the handlebar to attach a phone mount too.

I also really like the hard plastic cover that automatically closes over the charging port when you’re done recharging. Too many e-scooters have rubber covers you need to manually close, which is easy to forget, and it’s not something you want getting wet or damaged. (Yadea doesn’t recommend riding the e-scooter in the rain). If it does get wet somehow, always wait for it to dry before charging.

You turn it on via the power button that sits just below the dashboard. I hate this orange button. It’s so hard to press, and it’s the only button on the scooter, so you need to press it multiple times to control certain functions. For example, press it twice in succession to turn on the front light. Press it three times to switch from kilometers per hour to miles per hour. It is a bad button. Boo.

That brings me to the next pain point. The KS5 Pro suffers from short-term memory loss. Once you switch it from kph to mph, it reverts back to kph once you turn off the scooter. The same is true with Cruise Control, which you toggle on by pressing the damn button seven times. Cruise Control is so useful. It holds your speed when you hit 17 or 18 mph, so you don’t need to constantly hold the throttle, but you need to turn it on every time you start the e-scooter. It’s annoying.

The solution is to use the Yadea app (Android, iOS). But it’s clunky. You need to scan a QR code to pair the KS5 Pro with the app, so you’d think it’s the QR code that sits on the side of the scooter’s deck, right? Nope. It’s the QR code on page 10 of the manual. Once that’s paired, you can have imperial units and Cruise Control turned on permanently. You can also see ride data, battery life, and even lock the scooter, though an app lock doesn’t prevent anyone from throwing it into the back of a truck.

This app is how you update the KS5 Pro, but unfortunately it kept failing to install the firmware no matter how many times I tried.

The KS5 Pro shines in how it rides. It’s not too rough, thanks to the 10-inch solid tires, though it’s nowhere near as smooth as my experience on the pricier Apollo Ghost. Still, I never felt like I was going to get bucked off riding over potholes. It’s fairly quiet too.

There are three “gears” you can cycle through—Eco, D, and S—and each regulates speed (all controllable with a single press of that darn orange button). I usually left it on S, which lets you hit the scooter’s top speed.

Kicking off at traffic lights, it accelerates quickly, but the 500-watt rear wheel motor is not powerful enough to speedily cruise up low inclines, let alone steep hills. It usually hovered around 10 to 13 mph going up hills in Crown Heights, Brooklyn. When roads are flat, I easily hit 20 mph (which is the legal limit in New York City). That speed is perfect for cities where you’re frequently starting and stopping for pedestrians and traffic.

The brakes, which consist of a front drum brake, a rear disc brake, and an electric brake, never gave me trouble in quickly coming to a halt. There’s regenerative braking, where you’re supposed to get some juice back as you brake, but I didn’t notice a difference.

It’s too bad that regenerative braking didn’t work, because the scooter’s range fell far short of what was promised. Yadea claims that the scooter has a range of 37 miles. While your mileage may vary (ha ha!) depending on terrain and rider weight, I just can’t fathom how Yadea arrived at that number.

Personally, I never had battery problems, because my trips are usually around 5 or 6 miles to run errands or visit my parents. It usually needed a recharge after 10 to 12 miles, which is average for a cheaper e-scooter. But the range drops significantly more if your trip has a climb. A roughly 5-mile round trip over the Williamsburg Bridge nearly depleted the battery because of the bridge’s incline, so a 37-mile trip seems like aiming for the moon.

Despite these complaints, I’ve enjoyed riding the KS5 Pro for the past few weeks. It’s great for short trips, is more comfortable than many small-wheeled electric kick scooters, and is more than speedy enough for most if you’re usually on flat roads. Just don’t aim to cross town in it, and I hope that orange button doesn’t bug you as much as it did me.

That the House panel did not provide the Justice Department with transcripts of Cassidy Hutchinson’s interviews speaks to the panel’s reluctance to turn over...
Read more