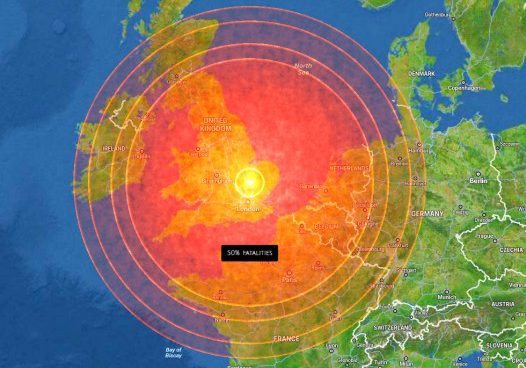 If you’ve ever wondered about the kind of damage an asteroid crashing into the earth could cause, there’s a simulator tool that allows you to do just that.

The website called ‘Asteroid Launcher’ uses Apple Maps to pull satellite footage of the Earth into its simulation.

Using this tool, you can pick any spot on the planet as your impact site and adjust the size and type of space rock you want to simulate. Finally, you can feel like an evil scientist and launch the asteroid.

The software then tells you the chaos that will ensue if that apocalyptic event comes to pass.

The crater would be 19 miles wide and almost 0.50 miles deep. The blast would be equivalent to 1,358 gigatons of TNT, releasing more energy than the last eruption of the Yellowstone volcano.

Asteroid Launcher also shows you that the impact would result in a fireball that’s 44 miles wide and ‘clothes would catch on fire within 228 miles of the impact’.

In addition, the 250-decibel shockwave would kill an estimated 7,500,362 people and rupture the eardrums of anyone within 173 miles of the impact.

Asteroid Launcher was created by Neal Agarwal, a developer with a passion for creative coding. The project took him about two months to build with the first month dedicated to research.

‘I love playing out disaster scenarios in my head and so I’ve always wanted a tool that would help visualize the effects of some major natural disaster,’ Agarwal told Motherboard.

‘Asteroids are a good choice since their effects are so far-reaching. I think the tool could also help people gain more appreciation for our need to deflect asteroids like in Nasa’s DART mission.’

The demand for the tool definitely seems to have caught on. Agarwal said on Twitter that over 25 asteroids were being launched every second.

People have been quick to use the tool to vent their frustration by flinging asteroids at their workplace or rival sports teams.

‘I had a fun time finding an asteroid that was big enough to destroy my workplace but not my apartment,’ wrote one Reddit user.


MORE : ‘Planet killer’ asteroid discovered hiding in the glare of the sun